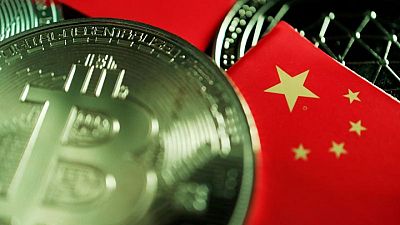 NEWYORK – Chinese cryptocurrency addresses sent more than $2.2 billion worth of digital tokens to addresses tied to illegal activity such as scams and darknet operations between April 2019 and June 2021, according to a report from blockchain data platform Chainalysis released on Tuesday.

However, China’s transaction volume with illicit addresses has fallen drastically over the two-year period in terms of absolute value and relative to other countries, Chainalysis said. The big reason is the absence of large-scale Ponzi schemes such as the 2019 scam involving crypto wallet and exchange PlusToken that originated in China, it noted.

Users and customers lost an estimated $3 billion to $4 billion from the PlusToken scam.

The vast majority of China’s illegal fund movements in crypto has been related to scams, although that has declined as well, the Chainalysis report said.

“This is most likely because of both the awareness raised by PlusToken, as well as the crackdowns in the area,” said Gurvais Grigg, global public sector chief technology officer at Chainalysis, in an email to Reuters.

The report also cited trafficking out of China in fentanyl, a very potent narcotic pain medication prescribed for severe pain or pain after surgery.

Chainalysis described China as the hub of the global fentanyl trade, with many Chinese producers of the drug using cryptocurrency to carry out transactions.

Money laundering is another notable form of crypto-based crime disproportionately carried out in China, Chainalysis said.

Most cryptocurrency-based money laundering involves mainstream digital currency exchanges, often through over-the-counter desks whose businesses are built on top of these platforms.

Chainalysis noted that China appears to be taking action against businesses and individuals facilitating this activity.

It cited Zhao Dong, founder of several Chinese OTC businesses, pleading guilty in May to money laundering charges after being arrested last year.