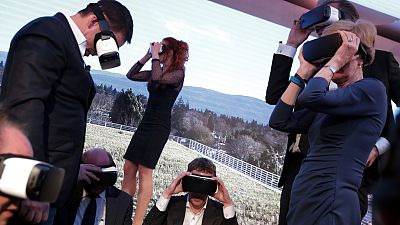 Facebook's Mark Zuckerberg has hailed the so-called "metaverse", describing it as the "next generation of the internet and next chapter" for the company, he told investors in a conference call on Wednesday.

The metaverse, short for "meta-universe", is a digital world where the real and virtual merge into a vision of science fiction and allows people to move between different devices and communicate in a virtual environment.

In practical terms, it refers to augmented- and virtual-reality products and services. The new market segment could generate "entirely new experiences and economic opportunities," Zuckerberg told investors on Wednesday.

The Facebook boss' comments followed a warning from the company that it expects revenue growth to "decelerate significantly" in the coming months.

Facebook said it expects Apple's recent update to its iOS operating system to impact its ability to target adverts, adversely affecting ad revenue in the third quarter. The iPhone maker's privacy changes make it harder for apps to track users and restrict advertisers from accessing valuable data for targeting ads.

Zuckerberg has in recent weeks shifted his focus to talking about the metaverse. On Monday, Facebook announced it would create a product team to work specifically on metaverse-related projects.

“In the coming years, I expect people will transition from seeing us primarily as a social media company to seeing us as a metaverse company,” Zuckerberg said.

“In many ways the metaverse is the ultimate expression of social technology.”

Zuckerberg told The Verge in an interview last week: "You can think about the 'metaverse' as an embodied internet, where instead of just viewing content — you are in it."

What is the metaverse?

In April, five virtual concerts by rapper Travis Scott, who appeared as an avatar in Fortnite, were followed by more than 12 million gamers.

It has also purchased a bevvy of VR gaming studios, including BigBox VR. It has about 10,000 employees working on virtual reality, The Information reported in March.

Zuckerberg has said he thinks it makes sense to invest deeply to shape what he bets will be the next big computing platform.

"I believe the 'metaverse' will be the successor to the mobile internet, and creating this product group is the next step in our journey to help build it," he said in his Monday Facebook post.

He told The Verge: "If we do this well, I think over the next five years or so ... we will effectively transition from people seeing us as primarily being a social media company to being a 'metaverse' company."

"Facebook has its eye on a sci-fi prize," said Sophie Lund-Yates, equity analyst at Hargreaves Lansdown.

"This is little more than an ambition for Facebook at the moment...if the idea comes to fruition, it could be a valuable income source."