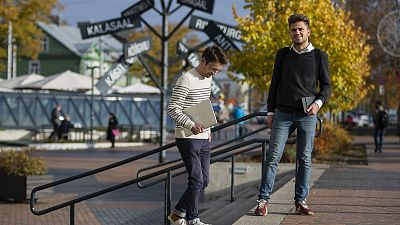 Benoît Gufflet and Dimitri Kremp, the pair behind the Across the Blocks research on smart cities.   -   Copyright  Eduardo Alessandro/Across the Blocks
By Pascale Davies  •  Updated: 21/07/2021

Frustrated with the term "smart city" being used as a buzzword without actually meaning anything, two French graduates set off to seven cities across the world to discover how cities really use technology to improve our lives.

Benoît Gufflet, 26, and Dimitri Kremp, 24, met three and a half years ago while studying for their masters’ degrees in Paris.

After graduating, they left the French capital and set off with their backpacks in January 2020, travelling to Rio de Janeiro, Medellin, Toronto and Singapore. The COVID-19 pandemic put a temporary pause on their plans, however, but in May 2020, they resumed their trip and continued on to Helsinki, Stockholm and Tallinn.

They were driven by their “passion for urban environment and passion to understand how tech can transform the cities to understand what will be the future of our cities,” Gufflet told Euronews Next.

Cisco and IBM developed the concept of a smart city in the 2000s and both produce yearly rankings. Cisco defines a smart city as one that "uses digital technology to connect, protect, and enhance the lives of citizens".

"You have rankings every year trying to award the best smart city strategies around the world for cities. And you don't understand in the end, what's the difference between the cities, what truly lies behind the word," said Gufflet.

Smart cities work by using Internet of Things (IoT) sensors, video cameras, social media and other inputs to provide city authorities and citizens constant feedback, which they can then use to make more informed decisions.

"And what we've been studying on the field shows that today, the real impact, the real concrete impact of those technologies within cities is still limited".

In fact, the pair scraps the term smart city altogether and instead prefers to call them "learning cities".

They define a learning city as one that is "progressively learning to use and to deploy these digital tools in order to become progressively smarter".

To know more about what works and what doesn’t, on their travels they interviewed hundreds of citizens, public authorities, start-ups and larger companies, academics and experts from around the world.

Each city, each country, has its own culture, its own technological development and you can’t copy and paste a project.

Benoît Gufflet
Author, Across the Blocks

What they discovered has already had huge implications. They compiled their research into a short book called Learning Cities, which is garnering the attention of local municipalities.

The graduates even presented their findings, which have grabbed the attention of a range of businesses, to the mayor of France’s northern port city of Le Havre, the former prime minister Édouard Philippe.

The French duo was sponsored by French internet and mobile phone company Bouygues, its urban developer sector Bouygues Immobilier and Wavestone, a French IT service management company in order to use the data to see how a city can or cannot be transformed for smarter living.

What did they learn on their expedition?

"We were really amazed with Estonia and Tallinn for so many reasons, geographical reasons and historical reasons," said Kremp.

“Estonians have a really different relationship with technology. They’re digital natives. So, we could see how when the municipality or the administration launched new digital services, we could see how quickly this was appropriated by the population”.

He notes this is the striking difference with countries such as France. When the country launched its COVID-19 tracking app TousAntiCovid, French people took time to really understand how to use it.

The French pair were able to witness how Singapore, which is currently ranked as the world’s smartest city, best used digital technologies during the onset of the pandemic.

They reached the city in March 2020 and endured 14 days of quarantine. But they say their study of Singapore was a particular highlight.

"We could really witness how this city deployed really effectively some digital tools in order to mitigate the propagation of the virus and to help people adapt their behaviours to this threat," Kremp told Euronews Next.

This included a portal unveiled in Singapore called Safe Distance @ Parks, he pointed out, which allows the public to check how many visitors are at parks and green spaces in real-time.

"We were amazed to see how quickly the smart nation was able to develop those tools and how quickly they were appropriated by the population," Kremp said.

How to make European cities smarter

But they say taking one formula from a city and implementing it into another doesn’t work.

"Each city, each country, has its own culture, its own technological development and you can’t copy and paste a project," said Gufflet.

"You can’t take this innovation from Singapore and take it to London because the cities need to have their own philosophy, their own strategy regarding smart cities".

In Stockholm, Gufflet found that the idea of a smart city was being used as just a tool.

"It [Stockholm] is just using those digital tools to achieve a specific objective,” he said. “And the objective Stolkhom identified was its 2040 objective, which is achieving carbon neutrality. All the projects that you will see in Stockholm, they need to have this in mind".

"If you don't have a clear objective and you just do this as a tech for tech mission, it's just going to fail," he said.

The pair also advise experimenting with technology to see what works and what doesn’t.

"Trying to transform [cities] to tackle these enormous issues they may be sanitary, that may be health-related issues, that maybe diversity, they may be the environment, but in order to do that, they need to try to test as many projects they can, the need to test and try new things,” says Gufflet.

"And this is why we say learning cities because cities need to be learning what they will want to become".

What’s next for the learning travellers?

Since graduating from their masters’ programme, they are keen to put their experience into practice.

Kremp has started working for an investment fund, which is dedicated to the smart city idea.

"We invest in new start-ups from the smart city and real estate ecosystem," he said.

"So it's a nice way to reinvest everything that I've learnt during this project in a more concrete way".

For Gufflet, he says he wants to continue trying to explore these smart city transformations.

"I don't know exactly how, but I truly believe that this is just the start of creating something related to understanding the future of citizens," he said.