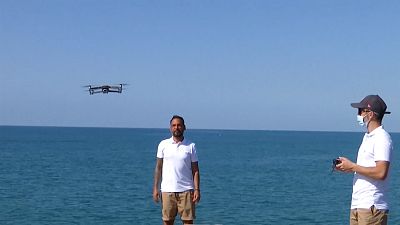 The Catalan beach town of Sitges is trialling the use of drones to monitor the occupancy of its beaches, as Barcelona and the surrounding northeast corner of Spain braces for further COVID-19-related restrictions.

The region is beginning to shut down once again to stem an unchecked wave of the Delta variant of coronavirus.

Authorities in Catalonia are rolling out a series of measures to combat the new outbreak.

Between July 11 and August 22, two drones will constantly hover 50 metres from the beaches of the famed seaside resort at an altitude of 30 metres.

A nightly curfew was reintroduced by Catalonia's authorities in the latest effort to ratchet up restrictions and discourage social gatherings where the virus can spread.

The curfew has so far failed to dissuade the large crowds descending on Barcelona's beaches, according to reports in the Spanish newspaper El País on Monday.

'The situation is dire'

The drones have been welcomed by some who believe young people are driving up infection rates.

"I think they're doing the right thing. With drones surveilling so beaches don't have more people than they should. Because the situation is dire," said Sitges beachgoer Teresa Losada.

"And the youngsters aren't being very responsible. Because they should have vaccinated younger people first. They are causing all the problems".

The more infectious Delta variant is pushing infections back up in many countries, even in Europe where vaccination efforts are going well and the public healthcare systems are robust.

But Catalonia is now registering double the Spanish average and is among the most hard-hit areas in Europe with over 1,000 cases per 100,000 inhabitants over 14 days.

A curfew from 1 am to 6 am was introduced in 161 Catalan municipalities.

Courts in other regions have so far resisted issuing similar overnight curfews and restrictions.

Researchers have converted a paralysed man’s brain signals into words

This doctor injected himself with microchips to make life simpler