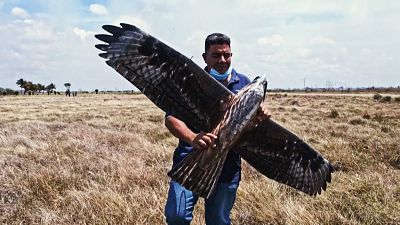 When raw materials are scarce in a country under economic sanctions, you have to get creative.

That’s the experience of Alasoluciones, an eight-man team of engineers who are building homemade drones in their garage in Mayabeque, Cuba.

In a sector known for cutting-edge tech, Alasoluciones designs and builds drones in its rustic workshop and transport and launch them from its mobile office, a 1958 Ford Fairlane.

Beginning in 2017, the team has produced the drones using scrap metal, plastics, and wood felled from nearby forests.

Their latest creation is a hawk drone that screeches to scare birds away from sites like airports.

There is now a move to permit the start-up of small and medium-sized enterprises (SMEs) in the country. Prime minister Manuel Marrero told the ruling Communist Party Congress this month that "regulations have been drawn up that will allow proposals to be made so that, once approved, we can start now".

It’s a turning point for cottage industries like Alasoluciones.

"[The team] gives solutions and has many perspectives," Rene Gonzalez, President of Cuban Aviation Club and a former Cuban spy, said.

"First, it is a highly motivated group with a very high vocation, but it is also venturing into an activity that has great potential for the economy of any country".