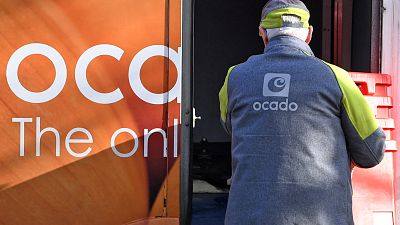 UK online supermarket Ocado suffered a fire at one of its warehouses after three robots collided.   -   Copyright  PAUL ELLIS/AFP
By Tom Bateman  •  Updated: 21/07/2021

A fire at an online supermarket's warehouse in the United Kingdom started when three robots crashed into each other, the company involved has said.

The blaze which broke out on July 16 at the Ocado warehouse in Erith, London resulted in cancelled orders for customers of the online grocery shop.

London Fire Brigade sent 15 fire engines and around 100 firefighters to contain the fire, which it called a "deep seated and challenging operation".

"Firefighters worked hard in hot and arduous conditions inside the warehouse. Around 800 staff evacuated before the Brigade arrived. There were no reports of any injuries," London Fire Brigade station commander Steve Vydelingum said of the incident.

"No one has been injured and all colleagues on site are safe. The damage is limited to a small section of less than 1 per cent of the grid having been contained by planned fire attenuation measures," Ocado said in a statement.

Ocado's "grid" is the part of the warehouse where its automated grocery picking robots go to work. The company claims that through automation it can process a 50-item shopping basket in ten minutes.

It's not the first time Ocado's robotic warehouse workers have been implicated in a fire.

In February 2019, the company's warehouse in Andover, southern England, burned to the ground in a three-day long blaze after a fault in a battery charging unit set fire to the plastic lid of one of the grocery picking robots.

A report published by Hampshire Fire Service in September 2019 called the Andover fire "unprecedented within the UK".

Ocado describes itself not as a supermarket, but as a tech company.

While consumers in the UK will know the company for its food home delivery service, Ocado's big business is marketing the infrastructure and software that retailers can use to develop their own online grocery businesses.