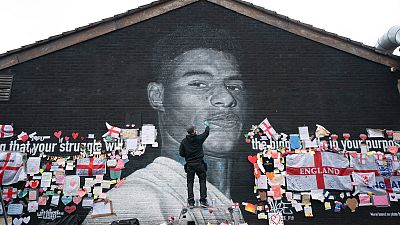 At least three players have been subjected to racist abuse since England's defeat by Italy in the Euro 2020 final on Sunday night.

The Times newspaper reported that the government wants the platforms to provide details of those who made racially abusive comments so it can “make examples” of them.

"We need to ensure that those platforms take action and if they don't, the government will take action against them," treasury minister Stephen Barclay told Britain's Sky News on Tuesday.

The statement comes after the UK's prime minster himself received criticism from media and England players about his lack of support, despite calling the acts of online abuse “appalling”.

In the lead-up to Euro 2020 Boris Johnson failed to criticise football fans who booed or jeered players for taking the knee before a match. The gesture has been linked with anti-racist activism ever since American footballer Colin Kaepernick took the knee before a game in 2016.

Johnson has since condemned the abuse experienced by England players.

"This England team deserve to be lauded as heroes, not racially abused on social media. Those responsible for this appalling abuse should be ashamed of themselves," Johnson tweeted.

The events have also sparked renewed anger towards UK home secretary Priti Patel, who came under fire for describing taking the knee as “gesture politics” during an interview in June.

On Monday Patel said she was "disgusted" by the "vile racist abuse" the players had received and called for police action against the perpetrators.

'It starts at the top'

Speaking to Sky News, football commentator and former England player Gary Neville accused Johnson of a lack of leadership, arguing that change of this magnitude "starts at the very top".

"There is an issue obviously in football, there is an issue in society where we feel it's acceptable, basically, to criticise players for sporting actions because of the colour of their skin," Neville told Sky.

"But, I have to say, accepting and validating that players who take the knee are promoting equality and inclusion and defending against racism, it's coming from the very top”.

Marcus Rashford, one of the Three Lions players targeted by online trolls, addressed the abuse he had received in a statement on Twitter.

“I've grown into a sport where I expect to read things written about myself. Whether it be the colour of my skin, where I grew up, or, most recently, how I decide to spend my time off the pitch.

"I can take critique of my performance all day long, my penalty was not good enough, it should have gone in, but I will never apologise for who I am and where I came from," he wrote.

Euronews Next has asked the UK's Home Office to comment on how the government plans to tackle racism on social media.

Hungary fined and given one-match fan ban for racist abuse