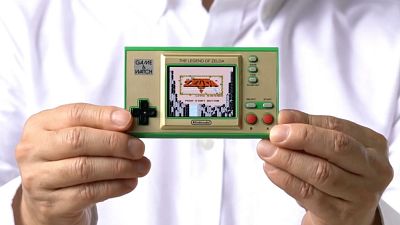 It was a big week for Euronews Next. We spent three days at the VivaTech 2021 exhibition in Paris, bringing you the highlights from Europe's biggest tech startup event.

But that's not all that happened this week. Games convention E3 brought some retro gaming delights, while London commuters got to grips with electric scooters.

Read on to get up to date with new tech this week.

The stories came thick and fast from VivaTech 2021 this week. On Wednesday, we caught up with President Emmanuel Macron who told us France needed to work hard to keep up in the global tech race.

"We've tripled the amount of funds raised in bulk and we've created between 150,000 and 200,000 jobs. We absolutely must not rest on our laurels. We have to go faster and harder, and in particular, deploy the same strategies that we have adopted at the European level," he said.

Euronews Next also checked out two startups trying to perfect the art of zero-emissions electric flight, whose struggles with the regulatory landscape – not to mention the practicality of battery-powered aircraft – show just how hard decarbonising air travel is going to be.

On yer bike, I mean, scooter

Anyone out and about in London this week may have caught sight of people riding electric scooters.

While e-scooters are still illegal to ride on public roads in the UK, trial rental schemes operating in London and other cities, including Newcastle and Liverpool, are exempt.

"We're doing all we can to support London's safe and sustainable recovery from the coronavirus pandemic and it's clear that e-scooters could act as an innovative, greener alternative to car trips," said Helen Sharp, who is overseeing the e-scooter trial for London's public transport body TfL.

"Safety remains our number one priority and we will work closely with the e-scooter operators, London Councils and the boroughs to ensure rigorous standards are consistently met," she said.

The London trial is making extensive use of geofencing, a GPS-based technology that means scooter riders will automatically slow down or even come to a full stop if they leave the parts of the city covered by the rental scooter trial.

Electric scooter rental companies Dott, Lime and TIER are taking part in the trial run, which is due to run for 12 months.

The gaming industry's E3 convention went online for the second year in a row this week. It was a muted affair, with Playstation maker Sony electing not to take part in the virtual event.

However, Japanese games maker Nintendo took the opportunity to announce a new handheld that may excite fans of its popular Legend of Zelda franchise.

The Zelda Game & Watch is a retro throwback featuring the original Legend of Zelda game, first released in 1986.

Gamers can also play Zelda II: The Adventure of Link, and the GameBoy remaster of The Legend of Zelda: Link’s Awakening on the device.

Nintendo released a similar Mario-themed Game & Watch for that franchise's 35th birthday last summer. The Zelda version is due out this winter.

Last week, we brought you the announcement that Apple was launching a new feature called Spatial Audio, which the company says makes video calls feel more natural by allowing for more nuance in the directionality of sound.

That feature was launched in beta for users of the Android version of Apple Music this week, along with the ability for listeners to play high-quality lossless audio in-app.