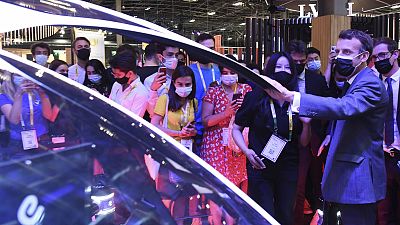 French president Emmanuel Macron hailed the progress France has made in the tech sector on a visit to the VivaTech 2021 conference on Wednesday but stressed the country could "not rest on its laurels".

Speaking to Euronews Next at the event in Paris, Macron said France was the number one country in continental Europe for raising funds to innovate in the tech sector but more had to be done.

"We've tripled the amount of funds raised in bulk and we've created between 150,000 and 200,000 jobs. We absolutely must not rest on our laurels. We have to go faster and harder, and in particular, deploy the same strategies that we have adopted at the European level".

'France will continue to drive innovation'

Macron attended the VivaTech 2021 event to host a roundtable with European startups where he discussed the policies Europe should adopt to build a stronger tech future.

"And so France will continue to drive the innovation ecosystem of Tech. What you are seeing, this energy, is also enabling the transformation of sectors that we know, of companies that were already established in France," he added.