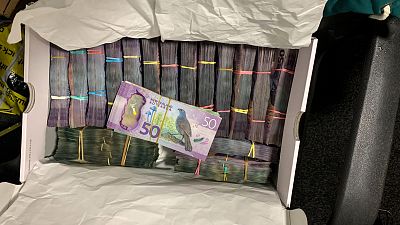 This undated photo from New Zealand police shows a box containing a large amounts of cash after being discovered during a police raid as part of Operation Trojan.   -   Copyright  New Zealand Police via AP
By Euronews with AP  •  Updated: 08/06/2021

More than 800 people were arrested worldwide as part of a large transnational investigation into organised crime.

Operation Trojan Shield was led by the United States' Federal Bureau of Investigation (FBI) and involved police from sixteen other countries as well as Europol, the European Union's law enforcement agency.

Jean-Philipe Lecouffe, Europol's deputy executive director, told reporters on Tuesday morning that more than 700 locations were searched worldwide and over eight tonnes of cocaine were seized.

Two tonnes of amphetamines and methamphetamines, 22 tonnes of cannabis and cannabis resin and $48 million (€39.4 million) in various currencies and cryptocurrencies were also seized. More than 100 threats to life were also mitigated.

Lecouffe described Trojan Shield as "one the largest and most sophisticated law enforcement operations" and as "exceptional by its global outcome".

It relied on an encrypted messaging app developed by the FBI, named ANOM, that criminals were then tricked into using, allowing law enforcement to monitor millions of messages about drug smuggling, money laundering and even planned killings.

Authorities in Australia, where 224 people were arrested and more than four tonnes of drugs were seized, said the app was installed on stripped-back mobile phones and its popularity grew organically in criminal circles after it was vouched for by some high-profile underworld figures, described as “criminal influencers."

It grew to service more than 12,000 encrypted devices to over 300 criminal syndicates operating in more than 100 countries, including Italian organised crime, outlaw motorcycle gangs, and international drug trafficking organisations.

Australian Prime Minister Scott Morrison told reporters it was a watershed moment that would keep the nation's communities safer.

“Today, the Australian government, as part of a global operation, has struck a heavy blow against organised crime," Morrison said. "Not just in this country, but one that will echo around organised crime around the world.”

Lecouffe also described the operation as "a real breakthrough" that allowed authorities to acquire "exceptional insight into the criminal landscape and will provide spinoff investigations".

"It also shows that criminal networks in the 21st century are more fluid and flexible than previously thought," he stressed.

Back in April, Europol had warned in a report released every four years into serious and organised crime that it had never posed as high as a threat to the EU and its citizens as it does today, stressing that the COVID-19 pandemic could exacerbate the situation further.

Colonial Pipeline: How hackers are making millions from cyber threats

Here's what you need to know about Iran's presidential election

As diplomats return, is Europe rebuilding bridges with Assad's Syria?