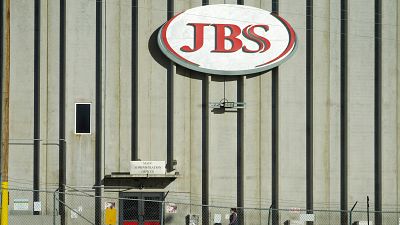 A weekend ransomware attack on the world’s largest meat company is disrupting production around the world   -   Copyright  David Zalubowski/Copyright 2020 The Associated Press. All rights reserved.
By Euronews  with AFP  •  Updated: 19/07/2021

The world’s largest meat processing company was hit by a cyberattack, shutting down production lines in the US and Australia.

Brazilian company JBS discovered on Sunday several of its servers on which its computer systems in North America and Australia are based were targeted by hackers.

The White House said JBS had notified the US of a ransom demand from a criminal organization likely based in Russia.

JBS said it expects most of its affected slaughterhouses and plants to return to normal by Wednesday.

"Our systems are coming back online and we are sparing no resources to fight this threat," the head of the US subsidiary, Andre Nogueira, said in a statement on Tuesday evening.

"Given the progress made by our IT experts and plant teams over the past 24 hours, the vast majority of our beef, pork, poultry and prepared foods sites will be operational" on Wednesday, he added.

The group itself has not publicly specified the nature of the computer intrusion.

White House principal deputy press secretary Jean-Pierre said the US “is engaging directly with the Russian government on this matter and delivering the message that responsible states do not harbor ransomware criminals.”

The FBI is investigating the incident, and the Cybersecurity and Infrastructure Security Agency is offering technical support to JBS.

In addition, USDA has spoken to several major meat processors in the US to alert them to the situation, and the White House is assessing any potential impact on the nation’s meat supply.

Ransomware exploits security holes to block computer systems. The perpetrators then demand a ransom to unblock them.

It was an attack of this type that targeted the operator of a huge American oil pipeline, Colonial Pipeline, at the beginning of May, causing major problems with the supply of petrol in the south-eastern United States for several days.

Colonial Pipeline later admitted that it had to pay the hackers $4.4 million (€3.16 million) to get fuel flowing through its pipes again.

JBS did not say in its statement whether or not it had paid a ransom.

The data of customers, suppliers or employees has not been compromised, JBS said.

In Australia, operations were paralysed on Monday and its 10,000 employees sent home without pay, union official Matt Journeaux told AFP.

In the United States, some production lines were suspended on Tuesday at at least two sites in Iowa, and at least two slaughterhouses, in Wisconsin and Texas, shut down the lines completely, according to posts on their respective official Facebook pages.

A plant in Utah was also shut down, according to an employee who answered AFP's call at the site.

The US subsidiary's sites in Mexico and the UK were not affected.