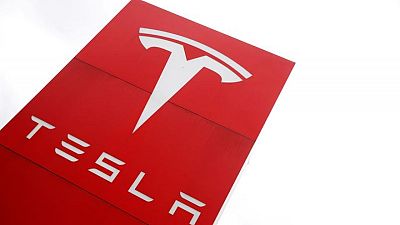 By Hyunjoo Jin and Sinéad Carew

(Reuters) – Shares of Tesla Inc fell 2% on Wednesday, faring worse than the broader market, as China’s crackdown on cryptocurrencies weighed on the electric car maker, which announced huge investment in bitcoins earlier this year.

Tesla disclosed in early February it had bought around $1.5 billion in bitcoins. As of March 31, it estimated the carrying value of its bitcoin investment at $1.33 billion and the fair market value at $2.48 billion.

Bitcoin has fallen roughly 30% since March 31, including a 6% slump on Wednesday, after China banned financial and payment institutions from providing cryptocurrency services.

“The rapid drop shows what a risky move it was for the carmaker to buy into the digital asset,” said David Kimberley, analyst at investing app Freetrade.

“It’s easy to ignore or cheer things like this on when it’s going in your favor but Tesla shareholders are now probably wondering what the point of the bitcoin purchase was and whether or not it will hurt their bottom line.”

Tesla had briefly allowed customers to pay for cars using the cryptocurrency, before withdrawing that option, citing environmental concerns that hit Bitcoin prices.

“Tesla is flipflopping on bitcoin from one quarter to the next, which isn’t a bullish sign for bitcoin or for Tesla,” Taylor Ogan, chief executive of Snow Bull Capital, said.