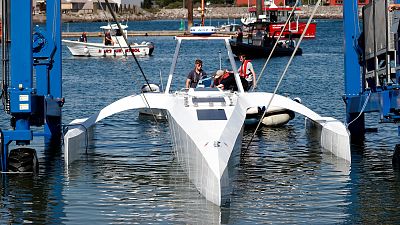 A team of researchers is hoping a ship called the Mayflower 400 will become the first unmanned vessel to navigate its own way across the Atlantic Ocean.

Delayed due to the COVID-19 pandemic, the launch was meant to take place last year to mark the 400th anniversary of the sailing of the original Mayflower, a ship that took settlers from England to North America.

Mayflower 400 is set to sail from Plymouth in the UK to Plymouth, Massachusetts next month.

The vessel has artificial intelligence technology and in-built computer systems to measure sea levels, the chemical content of the ocean, and record audio to track whale populations.

The goal is that autonomous ships like the Mayflower 400 will allow the collection of much more data than manned vessels alone - and be far less expensive.

"If we can remain safe in terms of other people on the ocean, other ships on the ocean and also dealing with whatever the ocean can throw at us from a weather perspective - [if] the AI systems can do that, that’s a huge move forward into reducing the cost of going to sea to collect the data that we need to understand the planet better, and that’s really the ultimate goal," said Brett Phaneuf, Director of Mayflower Autonomous Ship Project.

The ship will be monitored from land using the cameras and sensors aboard and can be remotely controlled in an emergency. The AI-trained "captain" - the vessel's onboard computer - has been trained using thousands of images and collision avoidance rules that it gradually learns from.

To see the boat in action, view the video in the media player above.