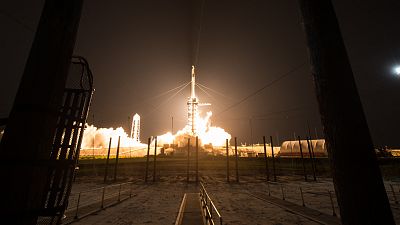 Early on Friday, SpaceX successfully launched four astronauts to the International Space Station (ISS), capping off a week in which great strides have been made in human space exploration.

Following NASA’s successful first flight on Mars on Monday, SpaceX made its own mark in the history books by reusing a rocket and spacecraft on a manned mission for the first time.

The rocket was last used on the company’s second manned flight to the ISS in November and the capsule, named Endeavour, was used on SpaceX’s maiden manned voyage in May 2020.

Flying on reused spacecraft has been a critical aim of NASA's partnerships with private enterprise and is seen as vital to make the future of space travel financially viable.

The four astronauts from the United States, Japan, and France are expected to reach the ISS on Saturday, roughly 23 hours after their departure.

It marks the first time a European astronaut, Thomas Pesquet, has flown in a commercial crew capsule. With 11 people in total on board, it will be unusually crowded upon arrival. Crew 2, a team already stationed at the ISS will return to earth a few days after the SpaceX rocket arrives.

The astronauts will spend six months in space carrying out experiments and upgrading the solar power system of the space station.

"This is really the golden era for us in terms of exploitation of the International Space Station," says Frank De Winne who leads ISS programs for the European Space Agency (ESA).

The next module of the ISS, built by Russia, is expected to reach the station in July. The module will include an ESA built robotic arm that Pesquet will be helping to make operational.

The ESA will also be a key partner to the United States for its next mission to the moon under NASA’s Artemis program.

De Winne notes that the station will at some point come to an end but he hopes that the partnership will continue in order to realise the dream of "European astronauts one day walking on the surface of the moon".