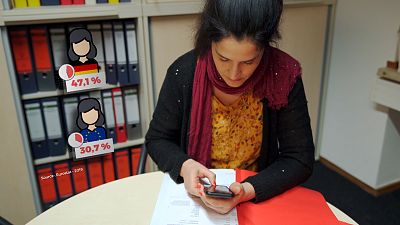 If you’re a woman working in Europe, you’re earning on average almost 15% less than a man, often for the same work. That means that for every euro a man earns, on average a woman earns 86 cents.

At the top, women in management earn nearly a quarter less than men. In Europe, only 10% of big-company CEOs are women. This all contributes to an even wider pension gap of 30%.

What creates the gender pay gap?

Women still take on most of the childcare which means they often reduce their working hours. A third of women in the EU work part-time compared to 8% of men. This makes it harder for women to progress in their careers. There are also more women in lower-paid sectors like caring and education.

The lockdowns have shown just how entrenched these gender inequalities are, with women taking on most of the extra unpaid childcare. They have also been most at risk of losing their jobs during the pandemic.

The European Pillar of Social Rights sets out the need for gender equality. To help close the gender pay gap, the European Commission is introducing pay transparency so companies will be legally obliged to publish how much they pay their workers.

Esther Lynch is the Deputy General Secretary of the European Trade Union Confederation (ETUC). She gave us her insight into this pay transparency directive. She says it's "a really important measure because all too often women are working beside colleagues, often for decades, and they presume that they're on the same pay, equal pay. Then you find out, sometimes at retirement, or sometimes because of a news story that the person you thought was doing the same job as you, getting the same pay as you, is actually being paid an awful lot more".

At the end of the day, Esther says what is needed are "better laws around work of equal value".

The EU's Pillar of Social Rights will help with this as it is also calling for Work-life Balance with the right to a fair share of parental leave and more flexible working. This has been adopted into EU law and member states must make it their national law by 2022.

"One of the key features we want to see in this directive is the provision that will end pay secrecy".

One of the biggest factors holding women back in the workplace is the constant juggle between work and home life. Data shows that Germany has one of the biggest pay gaps in Europe. Despite having a female head of state for the last 15 years, it is lagging behind its European neighbours in gender equality at work when compared to countries with a similar female employment rate.

Women in the German labour market

Nadine Epplen is a lawyer and represents women in the hotel and restaurant industry. The problem, she says, "is that even if employment contracts are issued on a 40-hour week basis, the employer can allocate the hours at any time. Of course, women who have children can't guarantee their availability". In her line of work, she meets women who have been dismissed and demoted because their timetables are not flexible enough.

The pandemic has also exacerbated problems related to the sharing of family tasks. Like Nadine and most of her clients, almost 50% of women in Germany work part-time to take care of their families. This is much more than the European average.

Nadine herself has two children and she would like to work full-time, but that's not possible for her because "the daycare times and school times do not always match" her working hours.

To improve the representation of women in the labour market, Germany, like other European countries, has until 2022 to implement the European directive on work-life balance, which includes better access to parental leave, and more flexibility at work.

According to economist Katharina Wrolich, there is a need to improve joint income taxes, and access to career opportunities for both parents. She says that Germany is shifting from a single earner family model to a one and a half earner family model. In her professional opinion, "Germany still has to make a lot of effort in order to improve access and quality of childcare, and also in terms of opening hours".

One area where Germany is performing well in terms of equality is in the number of women who are board members of publicly listed companies. Here it has 36% female participation. But for increased parity in this area, the country is also in the process of imposing quotas.

Hiltrud Werner is the only female board member of Volkswagen. She told us that she personally welcomes the quotas because she believes it will help employers to stop overlooking "people with high qualifications just because of biases".

However, she does think that reaching one's career objectives "doesn't come without a price". She admits that she had to make compromises to get where she is today.

How on track are countries across the EU when it comes to breaking through the glass ceiling?

At the current pace of change, Germany won’t see the pay gap closed until the next century and in France it could take more than 1000 years. Some countries are set for equal pay this decade. Belgium is one of those leading the way.

Esther Lynch told us why she thinks Belgium is doing better than other European countries on this score. She says that Belgium has more workers who are in trade unions. She believes this makes them "confident that when they raise questions, that when they complain that they won't be picked on, victimised and moved out, managed out of the firm as being trouble makers".

However, she does tell us of a recent case she came across where two equivalent jobs had a substantial pay difference. This she blamed on the simple fact of gender inequality in the workplace. She tells us that "too much of the pay gap is about the work being done by women, and simply that on its own being seen as justification for lower pay".

The pay transparency initiative will go a long way to help improve the gender pay gap, but European nations still have some way to go. The hope for the future is that women won’t have to make compromises to get to the top.