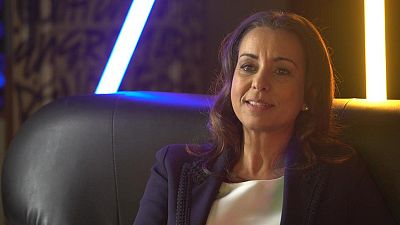 She is a woman on a mission and very successful. Ilham Kadri’s rise to the top was far from inevitable, but now she is one of the world’s most powerful business leaders according to Fortune Magazine. She is CEO of global chemicals company Solvay, her mandate, the holy grail of businesses these days, is to set Solvay firmly on the path of sustainability whilst ensuring profitability.

We meet in Brussels on a frosty December day. Kadri is joined by a couple of members of her staff. The atmosphere is friendly and relaxed, full of chatter and anecdotes.

“You need to dare show your vulnerability, vulnerabilities are a strength not a weakness”.

Ilham Kadri became CEO in 2019 and immediately got down to work. She has already made an important step by committing Solvay to the Paris Climate Agreement. This, Kadri tells me, is a "big deal because we are abandoning coal and this company started 159 years ago with the soda ash business using coal as a primary energy". She appears undaunted by the task but adds “We don't know how we're going to abandon all the coal as an energy in our manufacturing side around the world by 2030. But we commit to do it.”

Solvay is one of the world’s oldest chemical industries. Kadri explains that what is produced permeates nearly every facet of our lives: from car components, double glazing, soda-ash, hand sanitiser to vanilla essence in our cakes. “We call, by the way, the chemical industry, the mother of industries,” she says.

It is a broad portfolio and Solvay is now tentatively looking to join the circular economy. This, as Kadri explains, can only be done in partnership with others. One major project being worked on in conjunction with energy giant Veolia is recycling car batteries. A battery is “ full of precious metals, lithium, cobalt” and if these can be reused, the circle is closed, and “waste is not waste anymore!”

Kadri is a great communicator. She tells me how sustainability is personal to her own story. She grew up in Casablanca: “We lived in a very frugal environment and the conservation of food and water meant a lot at that time.” Her grandmother was illiterate and was her first role model. “She taught me the love of books and to respect people who put their thoughts and wisdom in writing. Being an African born lady, she loved to listen to wisdom and I got that from her.”

With Kadri at the helm, it appears Solvay has managed, so far, to weather the Covid-19 storm. Maybe also a lesson from a frugal upbringing, her approach to the crisis has been hands-on. She tells me with an element of pride, “I was the chief mask officer and not the executive officer anymore. We were all looking and dying to find enough masks to protect our employees.” Covid-19 has also been an accelerator for reform and restructuring. This has also led to job losses, which Kadri regrets but justifies by telling me that taking a different path could have led to failure. In the long run these “painful” decisions will save more jobs, she concludes: “After nine months of the crisis, we are a better company, I really believe it.”

Kadri is clearly confident and determined. When I ask her about breaking through two glass ceilings, that of being a woman particularly in a male-dominated industry, and of African origin, she laughs and tells me that was never her intention. “ In a way, Isabelle, I didn't target to break any glass ceiling, I targeted just to live my life and live my dreams and follow my passion.”

There is so much I would like to discuss with Ilham Kadri, her confidence is at once impressive and disarming. As our conversation draws to a close I ask her what leadership means to her and I am genuinely surprised by her answer. “You need to dare show your vulnerability, vulnerabilities are a strength not a weakness. And I truly believe that leaders who do not have those attributes are going to fail and they will disappear.”

Kadri it seems has no intention of disappearing.

This man thinks he has the answer to sustainable, inclusive motorsport