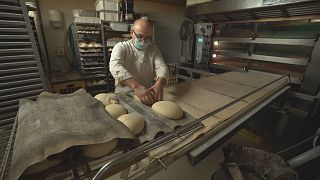 Business Planet heads to Brittany, France, to see how one baker is making dough again after he was forced to close his boulangerie in Paris.

For those companies going through the COVID mill right now, Ollivier Christien’s story is proof that it is always possible to bounce back in business. The baker runs a successful boulangerie with his wife in the village of Saint Coulomb just outside the historic French city of Saint Malo.

But it wasn’t always like this. In 2016, Ollivier was forced to shut his bakery in Paris after a dispute with a business partner. To close the company and start again he contacted Second Souffle (Second Wind), a nationwide association that helps entrepreneurs in difficulty bounce bank.

Explaining why he turned to the association, Ollivier says: "It was down to a combination of circumstances, I had a company that was in difficulty in Paris and the local council advised me to contact Second Souffle, to re-establish healthier communication, especially with banks, tax authorities, and the state, in order to make things less stressful when your company is not doing very well."

While Ollivier's difficulties are behind him, his experience seems especially timely right now given that so many good companies, through no fault of their own, are struggling to survive because of the pandemic. Ollivier says the support he received from Second Souffle to rebuild was crucial.

"It was very important. I was at a point where I absolutely had to close my company before doing anything else. I had lost contact with my first accountant, so Second Souffle advised me about other accountancy firms to help solve this problem, so that I could bounce back and set up another company."

Second Souffle is part of Portail du Rebond, a network of six associations in France. Philippe Le Meur, from Second Souffle, helped Ollivier when things were unravelling with his bakery in Paris. The Portail du Rebond network offers a range of services, including advice on how to avoid bankruptcy; suicide prevention and what to do after liquidation or a company is forced to close.

"In addition to accounting advice, the association accompanies its entrepreneurs to get a picture of the state of the business and the entrepreneur," Philippe explains.

The idea being, to enable the entrepreneur to bounce back with a new entrepreneurial project or job."

He adds, "Each association has its own specialism. The network creates a complete value chain. In response to COVID, the six associations are now holding monthly meetings to inform the ministry of finance of the situation on the ground."

It's for that reason the Portail du Rebond was awarded the Grand Jury Prize of the European Enterprise Promotion Awards 2020. Since 2006, the prize has helped create thousands of new companies and jobs.

Philippe Le Meur is the General Secretary of Second Souffle. Business Planet spoke to him to find out how the association within the Portail du Rebond helps struggling entrepreneurs.

What is "Second souffle" exactly and how does it help entrepreneurs in difficulty?

"Second Souffle is an association whose mission is to support all entrepreneurs attempting to bounce back or that are in difficulty, whether they have a company or not. There is no criteria or time limit to this. Each entrepreneur in difficulty has a mentor to guide them during this process to bounce back, following our 1-2-3 method: welcome, support and bounce back.”

How does Second Souffle complement and coordinate support with the "Portail du Rebond" network?

"Each association within the "Portail du Rebond" has its own specialisms: depending on the requirements of the entrepreneur facing difficulty, they will be redirected to the association that best responds to their initial request: notably, psychological support, help with some of the difficulties encountered by the entrepreneur and the chance to bounce back in business or find employment.”

A lot of businesses in France right now are struggling. How is Second Souffle adapting its support to help businesses affected by the pandemic?

"The current health crisis and the successive lockdowns will only make the situation worse. A resurgence of liquidations is expected from the first quarter of 2021. So, to prepare for this upsurge in entrepreneurs in difficulty, Second Souffle has organised training for volunteers on a monthly basis until the end of June 2021.”