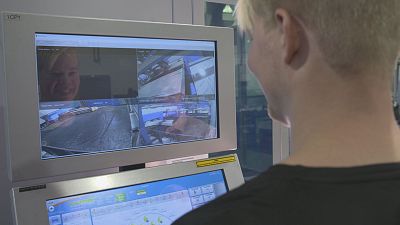 Futuris looks at how the relationship between man and machine in modern manufacturing is evolving through the adoption of Artificial Intelligence and automation.

No one knows the job better than the person who is doing it - that is the idea behind a package of novel ideas designed to make the most of factory workers' knowledge and experience.

This €4m study explores new ways for people and machines to work together.

Dr Eija Kaasinen from technical research centre VTT says the aim is to put people at the centre and to enable them to participate in designing their own work environment.

"They can participate in designing their work environment and how the work is organised and also give them ways to share their practical knowledge that often is tacit and not so visible."

Globally, automation and robotics are transforming manufacturing as part of the fourth industrial revolution. But this doesn't mean the human element is removed from work.

"Of course there are manual elements - but the work is changing towards knowledge work," explains Kaasinen. "It's more like working with the virtual counterparts of the physical things in the physical world."

A Pre-training Solution, for example, uses 3D models and cloud-based tutorials, while a so-called Knowledge Sharing solution makes the most of all the experience a worker gathers while running complex machinery, especially when something goes wrong, as Prima Power's Mariia Kreposna explains.

"So here the operator can open the additional dialogue box to get extra information about the situation. This is done by sharing the additional text, description, pictures or videos so the idea is in the future whenever the alarm with the same code happens, the operator will be able to learn not only the standard remedies but also other possible reasons and how to prevent this alarm happening in the future."

"Sleep was really important for my work performance"

At the Elekmerk factory in Keuruu, Finland, workers have tested the Worker Feedback Dashboard - a biometric monitoring tool - like a fitbit - and an app.

It charts someone's work achievements and their well being - such as sleep and steps taken per day - and shows how the two can be linked.

"When we interviewed factory workers during the project we heard that often they had negative feedback when something is not going well," says VTT's Päivi Heikkilä.. "So we wanted to develop an application that would also give you positive feedback of the fluency of your work and your accomplishments, so feedback of the things that are going well."

Ville Vuarola was one of five workers who wore the wristband for the three-month pilot scheme. He was happy to take part and says he was surprised at how a good night's sleep had a positive impact on his job.

"I was surprised to see how sleeping well influenced my work performance. Together with leisure activities, sleep was really important for my general performance at work," he says.

"We always consider the ethics"

Of all the Factory2Fit solutions, this was the one that proved the most controversial with fears expressed over the possible misuse of workers' data.

But Päivi Heikkilä says these concerns are unfounded.

"When we are developing these kind of solutions we always consider the ethics," she says, "and I want to stress and highlight that this should always be voluntary."

The data gathered is kept on a separate server, not in the factory system.

Researchers expect at least some of their Factory2Fit solutions to be commercially available by the end of next year.