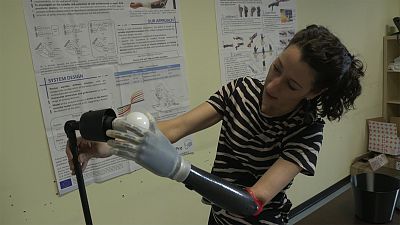 Our hands are perhaps the most useful tool nature has given us.

Whether it's switching on the light in the morning, turning a page in your favourite book, cooking a meal for the family, or smacking your brother around the head for a crass comment made over the dinner table, there is practically no limit to what we can do with them.

And many may take them for granted. The dexterity and synergy of our fingers is something that for decades scientists have been trying to emulate in technology, but with no avail.

Recently, however, a promising new project in development at the Italian Institute of Technology (IIT) could offer new hope for those whom ordinary hand movement is naught but a pipe dream.

One of those people is Maria. Born with a deformity in her left arm that made some everyday activities a significant challenge, simple tasks such as tying her shoelaces or making a cup of tea were, until recently, mammoth tasks, hindered by not having two hands to help her.

But that's about to change.

The ultimate in evolutionary design

Reproducing the natural architecture of a hand is fundamental to designing a prosthetic capable of improving the lives of those with deformities or who have undergone an amputation.

Working alongside engineers at IIT's Genoa campus, Maria has helped to design and develop a mechanical prosthetic that is delivering performances close to those of a human hand.

Soft Hand Pro is a European open hardware project, designed for grasping and soft manipulation, the idea being to produce a simple lightweight, and, perhaps most importantly, affordable robotic prosthetic which won't break the bank for those in need.

Designed to within the budget of healthcare systems across the continent, it's hoped that patients won't have to foot the bill. But, at around €9,000 per implant, it's definitely at the top end of the budget sheet.

However, according to Maria, you simply cannot put a price on having two functioning hands.

"The hand is flexible and adaptable. It's a kind of relief for the person who uses it because you can have a personal interaction not only with the prosthetic hand but also with people, let's think of a caress, for example," she told Euronews.

"The extreme naturalness of this hand and the dexterity of the fingers invites us to play, to have something to do with it, both on our own, but also in our relations with others."

The clinical application of Soft Hand Pro has been developed in collaboration with hospitals in Zurich and Hannover. But the real conundrum at the centre of the project is how to emulate 'muscle memory' in an artificial limb.

Soft Hand Project coordinator Antonio Bicchi said that some may take for granted the actions and movements controlled by instinct, rather than the brain.

"Our way of interacting with the environment is not only linked to the neuron cells in our brain, but it is also linked to our whole body, both the intelligence that is in our brain and the one which is in our muscles, through our nervous system and our sensors," he said.

"The concept at the heart of soft pro is precisely this intelligence of the body. It is a widespread intelligence and recent results have shown that even some receptors in the fingertips perform a kind of analytical function; so it is an intelligence that is in the whole body."

A robot that feels

Taking on the challenge of creating a robot that responds to stimuli as a human might is no mean feat.

The synergy required by the human hand to grasp common objects can be approximated by a few coordination patterns.

Using this as a jumping-off point, researchers have conceived a mechanical system with the number of joints mirroring that of a human hand, able to adapt grip and force to suit an objects' shape.

Sensors read impulses from the muscles on the skin surface where the prosthetic attaches to the existing arm and use them to inform control mechanism.

According to IIT researchers Manuel Catalano and Giorgio Grioli, it was necessary to greatly simplify hand control in order to ensure the robot can convincingly imitate actions of the human appendage.

"This very complex architecture is managed through the use of a single motor that coordinates the movements of all the finger joints and it has allowed us to have a huge simplification of the hand control," said Catalano.

And according to Grioli: "The soft synergy is a coordinated movement of the joints of the hand, and this has basically allowed us to create a robotic prosthetic which is able to imitate more than 50% of the movements of the human hand."

Maria has now joined the Soft Hand Pro team in Genoa as a design expert, making important contributions both regarding design and user experience.

The latter is a crucial part of the process. It's all very well making a machine that can imitate the actions of a real limb or appendage, but it's whether the patient's body accepts it that is the real challenge.

In a similar manner to the way the body may reject a new organ after a transplant, the psychological rejection rate for artificial limbs is still high, standing at around 25 per cent of all implants.

However, Maria has taken to hers like a duck to water and will be showcasing the robotic hand and all its features at the next Cybathlon in Zurich - a competition in which people with disabilities compete in everyday tasks, using their state of the art prosthetics.