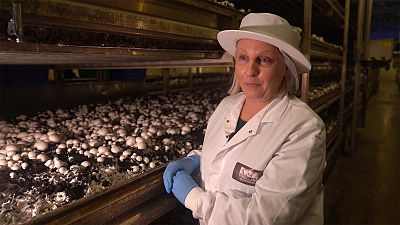 A fungal factory, that’s how mushrooms are often described at one of the world’s biggest mushroom producers in County Monaghan, Ireland.

The BioRescue project partner has its own laboratories where 40 scientists not only study the compost’s composition but also the mushroom itself in all its little details.

Peter Corcoran, chief executive of MBio, said: "We described the kingdom of fungi as a third kingdom, so it sits between plants and animals and occupies its own space.”

Jude Wilson, a biologist at MBio, outlined the health benefits.

“Mushrooms are very, very good for you," she told Euronews. "They are very healthy. They are low in fat, high in fibre, they’re also high in protein. They contain a lot of very valuable nutrients, such as minerals and vitamins.”

Mr Corcoran compared the humble mushroom to a superfood.

“Just like our skin, the mushroom produces vitamin D through the application of light almost identical to our own process. But importantly, because it is produced naturally by the mushroom, it is therefore a vegan form of vitamin D and there is a chronic deficiency of vitamin D globally.”

Ms Wilson outlined steps to increase the nutritional value of the fungi.

A healthy diet, according to the scientists, especially for vegans or people who spend more time in offices and cars instead of the sunlight.