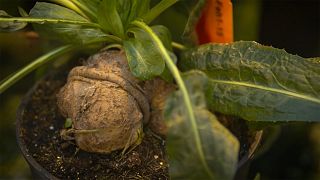 Gorgeous pale blue flowers above, with sippable root below. 5,000 years ago, ancient Egyptians cultivated the chicory plant for its health-boosting properties. And even today, the plant’s healing qualities are still revealing themselves as Euronews' Claudio Rosmino discovered in our latest episode of ‘Futuris’.

“Many know chicory as an edible plant or a coffee substitute, but the roots of this plant are a goldmine of healthy fibres. That’s why a group of scientists are trying to create new varieties through small changes to its DNA" said Rosmino.

Often used in the commercial production of Inulin, which is extracted from its roots and added to food products as a dietary fibre and sweetener. Inulin also works as a prebiotic and has beneficial effects on our gut and immune system.

Researchers at the University of Wageningen – in the Netherlands – are exploring new potentials of this plant through other chicory roots compounds.

But what is it about Chicory that makes it so special? We asked Dirk Bosch who is the CHIC project coordinator.

"We think it’s a kind of biological factory, which can make all types of compounds, all types of health-related compounds: medicines and food fibres that are good for your health. The lesson we have learnt about chicory, it is about so-called terpenes, and they are extracted here. It’s not known but many of terpenes in nature are medicines, so we want to check if the terpenes in chicory also are medicines and if we can boost the expression of these medicines, of these terpenes in the roots so that you cannot only harvest directly the fibres but also terpenes medicines from the roots."

For the time being, only the food fibres are being extracted, terpenes are removed because of their bitter taste.

The goal of CHIC's European research project is to boost and fully use these healthy elements by developing new varieties of chicory with specific properties.

According to researcher Katarina Cankar, scientists are developing new plant breeding techniques, based on small changes in the genome of chicory.

"The idea is that we do genetic modifications of these plants, and after that, we stimulate the plant to start making first the leaves and later the root tissue"

This modification technique is called CRISPR, an acronym for Clustered Regularly Interspaced Short Palindromic Repeats. It is widely used in agriculture and human medicine. It is not a Genetic Modification approach. Instead of introducing foreign genetic material like in GMO, here there are only modifications of the original genome (of the organism).

The project has received the support of a company called Keygene which is specialized in crop improvement by molecular breeding.

"We are not adding anything; we are just mutating or changing a small part of the plant’s DNA, to produce plants that have beneficial properties or characteristics. This is just a modern way of doing it, this kind of genesis-technics have been around for a long time but the new technologies allow us to do this in a much more precise, quicker way," said Keygene scientist Paul Bundock.

The next steps for researchers will be checking the DNA of the plants, to see if the genetic modification has been successful and analyze the quality of the terpene compounds, produced once the roots have grown.

"I have a vision, it's that instead of having one chicory variety, we’d have 20 from which the farmer can choose what he sees on the market, what it is needed for antibiotics, for food fibers. He can grow it and then the product can be extracted," said Bosch

Whether, for antibiotics, skin cream or a natural food preservative, the potential uses of this product extracted from chicory roots are expansive. The last stage before its commercialization will be the development of a terpene extraction procedure.