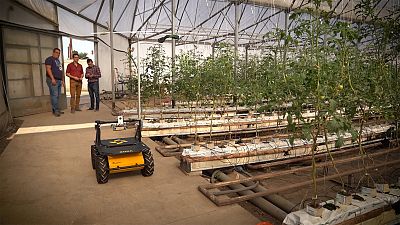 Agriculture is facing a historical challenge. In the next 30 years, food demand will increase by 70 %.

Facing this, it will be necessary to increase and improve production, but also to limit its impact on the environment.

Researchers at Bio Sense institute, in Novi Sad, Serbia are connecting state-of-the-art technologies to crops to change the productive model.

Their mantra: "we cannot feed today's world with yesterday agriculture".

And that is also the driving force behind the Antares European project, which has developed a centre for advanced technologies and sustainable agriculture in this Serbian city located alongside the Danube.

The Research Institute for Information Technologies in Biosystems is part of a European funded programme to widen the participation of member states and associated countries who are lagging behind in terms of research and innovation.

Agriculture of the future will use advanced technologies, such as sensors, robots, drones, big data and satellite imagery.

"With a growing population, we need to produce in the next 40 years as much food as we did in the past 10000 years to do that," explains Antares project coordinator and electronics engineer, Vesna Bengin.

Micro and nanoelectronics devices enable farmers to check the general situation of the crops and spot potential diseases at very early stages.

"Soil sensors will give you the information when to irrigate and then not so you can diminish the amount of water that is used for the irrigation process," says Goran Kitić, the head of the nano-micro-electronics laboratory at the Biosense institute.

"But also we're developing some sort of solutions that tell you how much of the food for the plant is in the soil how much nitrogen is in disarray."

"Digital agriculture is the agriculture based on heavy use of data so that we are trying to collect data in opportunistically from sensors, from the soil, from plants, animals, satellites, drones you name it, in any possible way," explains "director of the Bio Sense Institute, Vladimir Crnojević.

"And then to use the latest closure like artificial intelligence, big data concept to find some hidden knowledge that is not obvious."

The virtual counterpart of the Digital Farm is the Agrosense platform.

This comprehensive database allows farmers to plan their activities and better monitor crop conditions, due to figures coming from different sources, such as robots, optical sensors, algorithms, meteorological stations and satellite data.

"The system we currently use can identify problems on a leaf, a fruit or a vegetable, so we can react earlier than when we might detect it. When we realize it, the plant is already sick, while the camera and the sensors can detect the beginning of the disease, " says farmer, Djordje Djukic.

Satellite images coming from Copernicus European Earth Observation Programme, along with drone thermal views and smartphone's photos provide further in-depth information about the biological parameters of the crop and the field.

Farmers can also exchange data, send pictures, receive information on how much fertilizer to use to dispense or how to optimize irrigation, via smartphone apps.

Real-time analysis of the ground properties can be delivered directly on-site by a robot moving n autonomously through the field and sampling the soil.

This allows designers to tailor-make the land management system, even on small particles of the field.

"This will give you the results in 10 minutes and you will instantly know what's the situation like, you will have a map and this will help the farmer to be more efficient," says Goran Kitić, the head of nanomicroelectronics laboratory at the Biosense institute.

The resurgence of wood

The construction sector worldwide is responsible for one-third of all the CO2 emissions and 40% of all the wastes.

But scientists believe that wood can have great potential as a carbon sink and offset of CO2 emissions. Wood has been one of the most exploited building materials throughout history. Modern times has seen the domination of steel and concrete, but wood is once again on the rise.

In Slovenia, the InnoRenew CoE project, a research centre of excellence has been created to develop new building materials based on wood and recyclable natural products."

Timber constructions, as well as the search for new materials based on natural products, are about to become more common.

"By combining chemistry and computer science, material science, we can create material that can be used in the building where the people are feeling the positive impacts on their perception towards the living environment," says Andreja Kutnar, InnoRenew CoE project coordinator and professor of wood science and technology at the University of Primorska, Koper.

"it's very sustainable ...because when we cut the tree at the same time we plant another one"

Wood modification processes also allow desired properties to be produced by means of chemical, biological or physical agents. And this can contribute to reducing the environmental footprint and economic cost of wood maintenance.

"Wood is basically the champion of all the renewable material. It's not only it's carbon neutral it's actually carbon negative. So basically when you make a wooden house not only you didn't really emit any CO2 we were actually storing it in the construction itself," says Iztok Šušteršič , a research group leader at the Innorenew Centre of Excellence (CoE).

Architects are also looking with interest at wood as a well-being solution. A topic of our interest is its connection to the well-being of people. "How buildings can reduce stress. How it can improve health," says Eva Prelovšek Niemelä, an architect at Innorenew CoE.

Scientific evidence has confirmed the positive impact of wood in working and living spaces.

Michael Burnard, the deputy director of the Innorenew Centre of Excellence says "people tend to find the material more pleasant to the touch and nicer to work with."

Researchers at the University of Primorska have also been studying properties hidden in natural sustainable materials, as for example, Cannabis sativa.

Its fibres are undergoing a renaissance within the construction sector, because of their mechanical properties

"What is interesting is the mechanical performance of its fibres, which are almost similar to glass fibres," explains Laetitia Marrot, a researcher, at the Innorenew CoE.

"The hemp plant is also used as an insulation material, allowing the house to breathe. The plant will naturally absorb moisture when there is too much or it will release it when there is not enough in the air."

Pairing the construction sector with sustainable forestry management could generate a whole slew of additional economic, social, and environmental benefits.