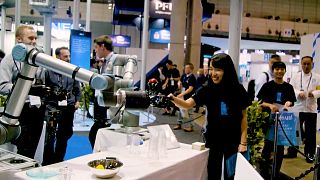 The latest cutting-edge technology has gone on display at a trade show in Japan.

From a motorcycle for the sky to avatar robots, our future selves will live even more in touch with technology.

This year marks the 20th anniversary for Japan's CEATEC (Combined Exhibition of Advanced Technologies) trade show, a four-day event featuring companies from around the world showing off their latest advances in technology.

The theme for 2019 is Society 5.0 and features a special section called 'City of 2030' where visitors can walk down a 'street' lined with technologies that hope to become everyday devices within the next ten years.

One the of the major draws to the futuristic city is the new Tactile Telerobot shown earlier this year at the Amazon Re:Mars Expo.

The Telerobot consists of a pair of robotic hands that can be controlled remotely via a set of gloves worn by the user. What sets this technology apart is the compelling tactile feedback the user can feel from the robot.

The group were brought together by Japan's ANA company, which hopes to one day incorporate the technology into their Avatar system.

The Avatar system is a collective of robots created to act as user interfaces. The goal is to have robots all around the world that users can then log in to and control, with different types of avatars for different purposes. Users could use avatars to visit distant relatives, go sightseeing, and even to explore places that might otherwise be dangerous for humans to visit.

Currently, ANA has several different prototypes in the works which range from simple screen interfaces that move on wheels to avatars that allow users to fish in real-time with haptic feedback, to bipedal robots that can carry up to 40 pounds and navigate uneven terrain.

Another company drawing in crowds is Tyco Electronics, which is working with company rLoop to create the rWing, a prototype personal flying device.

The rWing is described as 'a motorcycle for the sky' and features vertical take-off and landing, as well as a heads up display that displays information for the user while wearing the helmet.

The device is said to have a 250km/h cruising speed and the ability to support the weight of up to 100kg.

This year's CEATEC event runs from Tuesday, October 15th to Friday, October 18th in the Makuhari Messe event hall of Chiba in the metropolitan area of Tokyo.