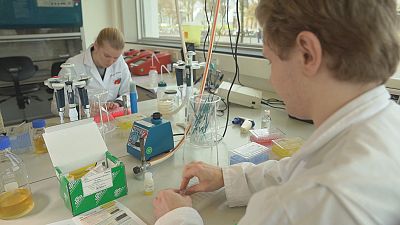 Humanity has used yeast for more than seven thousand years — for baking bread, fermenting food and beverages. But can our single-celled microorganisms rise to a greater task? Such as replacing petrochemicals in our medicines, cosmetics, plastics and fuels? Scientists at a European research project, CHASSY, are determined to make it a reality.

Scientific research shows that yeast cells can work as mini-factories, converting sugar into valuable chemicals. This method isn’t typically viable on an industrial scale. But researchers are changing that with genetic engineering. Euronews spoke to researcher Jack Pronk at the CRISPR lab in Holland about the promising possibilities ahead.

“To make these yeasts more efficient as cell factories what we need to do is rewire their metabolism. We need to rewire the way in which they convert sugars into products to make sure that almost every molecule of sugar that enters the yeast cell comes out as a product.”

Reprogrammed yeasts can recycle agricultural crops and waste into bio-molecules. These can then be used as building blocks for various components of plastic, cosmetics and other consumer goods. That means replacing petrochemicals with sustainable biological materials.

"In this project, we use genes sourced from plants to make a metabolite that is produced by plants such as oranges — we’re producing naringenin, a molecule produced by fruit trees like lemons, grapefruits or oranges,” said Molecular microbiologist Jean-Marc Daran of the Delft University of Technology.

To reprogram yeast, researchers at the Delft University of Technology are using an editing process called CRISPR. The procedure inserts genes from plants or bacteria into yeast. That can change how the cell factories work — and even how they smell!

“We edited the DNA, and we’ve added among others one gene from a plant. And because of that it now also really smells like roses. Your lab smells better of course, but we are more looking into the industrial applications so we can smell this as a flavour and aroma compound — mostly for the cosmetic industry, mostly perfumes but also mascara, lipstick — they all have this flavour compound in them,” metabolic engineering researcher Jasmijn Hassing told Euronews.

The results will be passed on to European companies who can then bring them to the market. This means that yeast strains must be robust enough to survive and produce valuable compounds not just in the lab but also on an industrial scale. John Morrissey is a yeast biotechnologist at the University College Cork and the CHASSY project coordinator:

“Once we have strains working at this stage and producing enough of the chemicals under conditions that mimic industrial conditions we will then transfer the technology to the interested partners. And the interested partners who have access to large fermenters would then test them on a pilot scale and larger scale, with a view to actually developing a commercial process.”This bio-based method may speed up the development of new consumer products by up to ten times. Innovations that would have taken 20 years can now make it to the market in a couple of years. Pronk says that these developments could have a huge impact: “The research we're doing is important for a very wide range of biotech companies — for example, to make bioplastics or other large volume products. But also for startup companies that want to develop a new product and start out essentially from scratch, and want to make very high added value compounds that you could use as a pharmaceutical, a food ingredient, an aroma compound, whatever. “

Although the benefits might not be obvious to customers, there are great environmental advantages of using fewer petrochemicals. This could mean our everyday goods can become more sustainable to produce and easier to recycle.