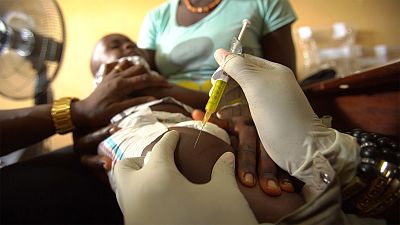 It is nearly five years since the Ebola virus outbreak in Sierra Leone which also hit the neighbouring West African countries of Liberia and Guinea. At least 11,300 people died and some 28,000 were infected by the virus between December 2013 and May 2016. The unprecedented health crisis sparked an equally unprecedented research effort to fight the deadly disease, particularly in the search for a safe and effective vaccine.

Back in 2014 Emma was 23-years-old. She was studying Management in Freetown, the country's capital. She knew that a deadly virus transmitted through body fluids was causing a lot of suffering. And then one day she came down with a high fever, diarrhoea, violent vomiting and joint pain.

"My friend lost her father. And I visited her. I was there for three days. The father died. They buried him. And I was still in the house. After they buried him I was back where I stayed. And I started to feel fever. I was feeling so hopeless at that time. The disease was attacking me. I was afraid. Because they said, ''Whenever they take you to the treatment centre you will not come back again." So I started to lock myself inside the room.''

Emma was isolated for six days at home, and then taken to a local clinic. She eventually won her battle against Ebola, but it came at a cost. Forced to stop her studies, she now lives at home with few prospects of finding a job.

The region where Emma lives was heavily affected by the outbreak. Whole villages were placed under quarantine. Families were not able to meet for fear of contagion and the local economy collapsed.

The scale of the outbreak is one of the reasons why the area was selected by scientists from a European research project. They are trying to develop a new vaccine regime to prevent the disease. More than 1000 healthy volunteers are taking part in the clinical trial in Sierra Leone. It includes adults and children between the ages of one and 17.

Isha Kanawah is a nurse at Ebovac-Salone, at University of Sierra Leone.

"If my child takes the vaccine, is my child going to be cured for Ebola? They (the parents) ask this question. And we tell them: ´this is a vaccine trial, so we don´t know yet if it might cure your child from having Ebola. This is a study,´" she says.

All the volunteers are closely monitored before and after their injection. Doctors routinely inform volunteers and their families about the disease they are trying to prevent.

"Ebola is one of the many viral haemorraghic fevers. Precisely, it is a multi-system disease, meaning that it can affect almost any organ in your body. It can affect your eyes, your ears, your blood vessels, your skin... almost everything, also the reproductive system," says Michael Morlai Kamara, a doctor at Ebovac-Salone, University of Sierra Leone.

According to the World Health Organisation (WHO), Ebola's mortality rate ranges from 50 percent to 90 percent.

Many doctors, like Agnes Bangura, who are now involved in the clinical trial, were on the frontline during the last major outbreak.

"No one was safe. That was what actually motivated me to take up this job. To see that we are going to work on this vaccine to prevent these things from happening again."

She says the new candidate vaccine is showing encouraging signs.

"We've seen that the vaccine is safe. And participants are actually producing antibodies in their blood against the virus. So it is very promising."

The volunteers blood samples are analysed in local laboratories, many of which did not exist before the outbreak. The region is still not even connected to the national grid, so researchers rely on generators to power their high-tech equipment.

The vaccine regime, under trial in Sierra Leone, is being developed and closely monitored from Leiden in the Netherlands. The regime is made up of two separate vaccines. Researchers say that dual approach has the potential to provide a better and more long lasting immunity against a dangerous family of viruses.

"When you get infected, the virus really reproduces very rapidly. You have millions and millions of viruses in your blood. And that leads to very high mortality. And that also implies that the immune protection that you need to get with a vaccine needs to be extremely high to be able to cope with such a load of virus. Ebola is not gone. It will not go away. It will be there and will come back again and again.''

In addition to lab research, scientists say the active involvement of local communities is crucial when conducting these type of complex clinical trials and while more research is still needed, scientists believe the vaccine regime they are currently developing has the potential for success.

"We have some very promising data from our clinical trials. The vaccine is inducing strong and lasting immune responses. And we are very happy to see that. So with this data package in hand we are now planning to go for licensure. And that is one of our immediate goals," says Kerstin Luhn, Compound Development Team Leader Ebola, at Janssen Vaccines.

This latest research comes under the umbrella of the Innovative Medicines Initiative, the world´'s biggest public-private partnership in Life Sciences.Its current 3.2 billion euro budget is co-funded by both the European Commission and Europe's pharmaceutical industry. The goal is to share knowledge in order to develop the next generation of vaccines, medicines and treatments against a myriad of diseases, including Ebola.

Pierre Meulien is the Executive Director of the Innovative Medicines Initiative.

"The World was very, very concerned about where this (the Ebola outbreak) was going on. And nobody could predict what was going to happen. On that, we were able to mobilise both industry parties and the public sector. And we built very, very quickly, the whole Ebola programme which includes not only vaccines but also diagnostics, and so on and so forth.''

The research into finding an effective vaccine for Ebola is set to continue. More extensive clinical trials are being considered, offering fresh hope to those living in high risk zones.