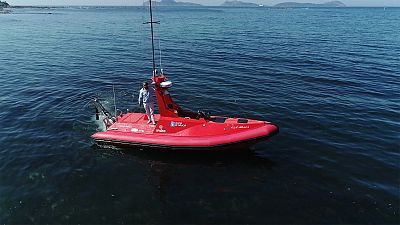 In this edition of Business Planet we visit Vigo, in Spain, where one company is attempting to rise to the challenge of how to make cooperation among European countries in the EU's defence sector more efficient.

"We have just launched the OCEAN 2020 project. It involves 42 partners, from 15 European countries. Its main goal is to display technologies for reconnaissance, sea interception and monitoring missions by a European fleet through the use of aerial, surface and underwater drones".

OCEAN 2020 is a program that supports research and development through a consortium led by Leonardo Industries, in the framework of the EU defence fund.

Its goal is to establish direct trans-European industrial links among smaller and bigger companies, in order to integrate their production as much as possible.

Startups and smaller enterprises are members of the consortium along with the bigger defence and dual-use industrial players. For example, a Spanish naval engineer has developed a preliminary prototype of a sea drone.

"From a marine engineering point of view, unmanned surface vehicles are opening new horizons. Until now, the need to carry crews on board have imposed a lot of limitations from an operational point of view. Now these sea drones offer much more freedom when it comes to designing them," says the CEO of Seadrone, Iñigo Echenique.

Inigo's start-up is one of the members of the Ocean2020 consortium, which pledged him a contribution of 200,000 Euros to develop and to equip the unmanned boat with high-tech devices compatible with an operational European integrated fleet.

Inigo's design puts the EU defence industry directly in competition with global high- tech companies. And that is an extremely ambitious goal.

Just what are the innovations these sorts of craft bring to the battlefield?

"Ships of this type allow monitoring and reconnaissance sea operations in potentially dangerous waters, both offshore and near the shore, with absolutely no risk for the life of the crews," says Antonino Arecchi.

"The participation of SMEs in military r&d projects ensures that suppliers are also involved in the European defence integration process. SMEs are rich in talents and credibility, and contribute substantially to technological innovation."

You will find further information on the Business Planet website and euronews' social networks.