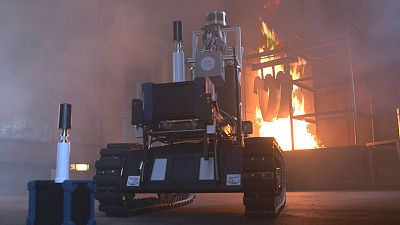 A burning building. Thick smoke. This is a classic scenario for firefighters. In a training centre in Dortmund, Germany, scientists have joined firefighters to test a new type of robot capable of intervening in these extreme situations.

Assessing the risks when visibility is very low: this is the major advantage of SMOKEBOT. It was developed as part of a European research project to support rescue teams.

Dortmund's fire brigade is collaborating with these scientists, experts in artificial intelligence and engineering. They made a fire-training site available to test this prototype equipped with multiple sensors.

Erik Schaffernicht, an AI computer scientist from Örebro University, says: "The most innovative development in our project is this radar camera here. It consists of a set of antennas and receivers that send and receive radar beams and try to reconstruct a 3-D image of the environment."

Until now, no robot has been able to intervene when smoke or dust is too thick. The goal is not only to visualize a site but also to smell it.

Schaffernicht says: "The robot's nose is hidden in inconspicuous boxes at the back. That means it's able to smell too. Because in such scenarios with fire there could be dangerous chemicals in the air. And that is something you want to know."

The robot is remotely controlled via a WIFI connection. In these extreme conditions, traditional sensors such as video cameras become ineffective.

This is why the system collects lots of information, which once merged, can give a representation of the environment despite the lack of visibility.

Achim J. Lilienthal, SMOKEBOT's project coordinator, says: "This includes information about the 3-D appearance in the house itself, information about temperature and even gas distribution in the room. This is of course very important for the firefighters, so that they can enter a building while taking fewer risks."

Despite its strengths, the system has limitations, particularly in terms of speed of intervention. New developments are already envisaged as well as the future deployment of other functionalities.

Lilienthal adds: "We can only look at scenarios where we have a lot of time. The speed of mission execution is very important and this will have to be tackled in the future, for example with drones. And it cannot detect people just yet."

After these initial field tests, firefighters believe that this type of robot can prove useful in tunnel fires or in the event of an accident on an industrial site where the risks are multiple.

Detlev Harries, Deputy Chief at Dortmund's fire department, says:  Exploration with robots can be really useful when there is damage in industrial installations, where there may be hazardous substances, where the installations are large. There are more obstacles. Unlike the furniture of an apartment, there can be machines that pass through the ceiling or the floor. Using robots you gain additional information that will help increase security for the emergency services."

It is still in the experimental stage. This new robot is not yet ready for the field. But in the years to come its sensory abilities will undoubtedly become valuable allies for firefighters.