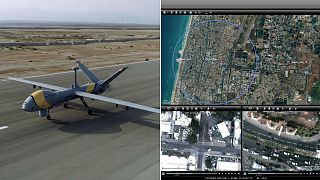 Europe's migration crisis has left thousands dead as they seek a better life by making the dangerous crossing over the Mediterranean. It has also stretched countries’ domestic resources and sparked political conflict on the bloc.

So far, 1,400 migrants have died off Libya’s coast since the beginning of this year, according to the UN's International Organization for Migration. Last year, 3,116 people were killed.

Yet one Israeli military technology manufacturer believes they have found a solution which could help governments tackle illegal immigration and rescue migrants from capsized vessels at sea.

Elbit Systems, which counts NATO among its customers, has developed a 1.6-tonne drone that can fly where others can’t.

The StarLiner, also known as the Hermes 900 HFE, has been designed to adhere to European regulations so it can roam in airspace reserved for civilian aircraft, such as around airports and over densely populated cities at altitudes of 10,000 to 30,000 feet (3,000 to 9,000 metres).

The drone, which is about the size of a single-seater aircraft with a 17-metre wingspan, is capable of collecting detailed imagery of the ground below it in real-time which could be transmitted to police headquarters’ or intelligence agencies looking to thwart terrorism and monitor their borders.

“We can use it for summits, for the Pope visit and FIFA games,” says Amir Bettesh of Elbit Systems' UAS Business Unit, who spoke to Euronews from their stand at the Farnborough International Airshow.

“We [can] also use it for monitoring illegal immigration, border protection, and when you are talking about all these challenges happening in Europe, this is a very congested area that we need to have a solution [for].”

The StarLiner has already been purchased by the Swiss Armed Forces, and Bettesh expects there will be many more buyers looking to make a deal in light of migration crises and terror threats which have intensified in recent years.

“This UAV (unmanned aerial vehicle) can fly both above land and above sea. It can fly above the Mediterranean area and monitor vessels of immigration much further than the coast of Europe,” says Bettesh.

“It can determine the vessel when they start their journey from Africa and save life, because of this early detection, and have all this information being transmitted to the authorities of a European country.”

The all-weather drone can fly 3,000km per surveillance mission and stay in the air for 36 hours, making it a more cost-effective alternative to manned aircraft, Bettesh says, where a typical team of three pilots will take turns to fly for seven to ten hours at a time.

But the idea of flying a surveillance vehicle above populated areas is likely to raise privacy issues: Concerns which are addressed in the European Aviation Safety Agency’s own rules for drone flight, but Bettesh refuses to be drawn in.

“We supply the equipment that is state of the art … and I’m sure that our government that uses it and our users know how to use it properly.”

Flying taxis: What's on offer and when will the first models fly?