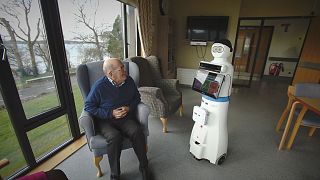 Mario is an assistive robot. He communicates with patients suffering from dementia and can talk to them, play music and provide them with daily news.

Currently under trial in Ireland, the UK and Italy, researchers are testing him at St Brendan's care centre in Loughrea in the west of Ireland. The day we arrive, Mario is meeting Mary who is 83-years-old. Two years ago she was diagnosed with severe dementia.

Adam Santorelli, an engineer from the National University of Ireland Galway, is part of the project. He says the robot is able to prompt a patient's memory through music or familiar songs.

"People with dementia, they might not remember some of the immediate daily activities, but they remember all the words in these types of songs that they remember from their youth. It is really something nice to see, and it really brings them happiness."

John Coen is a carer at St Brendans.

"You have music and lights, and there are lots of things that the robot can do. It helps them to talk. Once they see it, they are amazed about what it can do, of what the robot is capable of doing."

The impact of Dementia can be prevented, or at least mitigated, by simple changes in self-perception and brain stimulation. This is basically Mario's role.

Santorelli says the project has been a huge technical challenge.

"Something as simple as choosing whether to play music or select a (musical) genre, these extra questions are often challenging for somebody with dementia. So what we thought was very simple when we went out first and we tested it initially, we (then) found out that it was something really difficult for someone with dementia. So this was an iterative process. So we first came up with a design, tested it out and realised that it might be too complicated. So we went back, talked to the software engineers to modify these options to make it more simple and easily usable for people with dementia."

Mario was developed by scientists at a European research project and has been tested on dozens of patients. One of those is Des O'Doherty. He explains how Mario has helped him remember things which most of us would take for granted.

Researchers acknowledge robots will never substitute human care. But, they say, machines can at certain moments, address loneliness or isolation associated with dementia.

"We had one gentleman with real severe dementia. And he would spend his days walking alone in the corridors, not really engaging and interacting with anybody. And with Mario, using his game applications, this man would actually sit down and use a painting application; he actually sat in and painted for 40 minutes." said Sally Whelan, a researcher from the National University of Ireland Galway.

Those behind the project say the technology is almost ready for Mario to become a market reality in five to six years, possibly even sooner.

As Dympha Casey, the Project Coordinator explained: "It might come before that, because technology, actually the speed in which innovations are happening, are very, very quick now. So it could happen before that. But it does require more fine-tuning before it can hit the market."