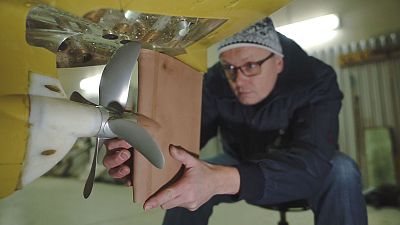 Imagine you are sailing on a vessel designed to reduce CO2 emissions by up to 25% and completely eliminate other pollutants, like sulphur or nitrogen oxide.

Believe it or not, the solution may lie at an icy pool in northern Germany. The ambient temperature there is -10°C and the water stands at a chilly -0.8°C”.

In the early morning, researchers are on an icy mission. They want conditions in a test pool to resemble the Arctic environment.

“In every test we perform some 200 measurements. We measure the thickness of the ice sheet in 200 different parts of the pool,” explains ship design engineer Quentin Hisette.

“This is because the ice is not uniformly compacted everywhere. It is the same situation we find in the Arctic. So we need to try to obtain a good average (for ice thickness) with tests that are sufficiently long, meaning that the data and measurements we get are accurate enough”.

With the test tank ready, naval and mechanical engineers take over. They use this model to assess how a newly-designed, larger ship propeller would perform in extreme conditions.

Rene Bosman a mechanical measurement engineer at the Maritime Research Institute in the Netherlands outlined how the tests are performed. He told Euronews:

“At the front we measure the resistance of the model. Here at the back, we measure the rotating speed of the propeller, as well as its thrust and torque. And we also measure the side forces, and the bending moments”.

The experiment is part of a European research project aimed at developing more efficient vessels which cause less pollution. Researchers say that this particular model propeller is very promising.

“We have learned that this is indeed a very nice concept (for a propeller). It has a lot of potential for fuel saving,” revealed mechatronics engineer Gerco Hagesteijn .

“This is kind of a designed concept study, so when it will be built, probably there will be some small changes for practical reasons because the ship owner wants them (the changes), and maybe you lose a little bit (of fuel saving performance). But normally this is a step into a new generation of ships”.

A tug in the right direction

A new generation of ships that are also being formed from within these Dutch shipyards.

Engineers have designed a tug here with a reverse-stern drive-system and a new hull shape that allows for more manoeuvrability at high speeds in overcrowded ports.

“Bigger vessels are entering our ports. So tug-boats have to have more power, but they have less space in which to manoeuvre,” explained mechanical engineer Robert Van Koperen.
“So this new hull shape will enable us to be very manoeuvrable”

The next step is to build tugs that run on compressed natural gas. Scientists see this greener alternative as offering a competitive edge in a challenging market.

“If you want to be competitive, you need to save money, for example in fuel. But also (lower) emissions in a lot of ports is a big issue. Ferries, cruises, dredging boats… they are developing hybrid systems. And to follow the market we would like to be also part of that”.

Researchers hope some of their innovations can become a market reality in less than 5 years.