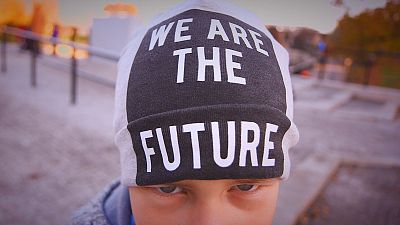 This week, we are in Estonia to visit a very unusual kind of village aimed at boosting the young entrepreneurial spirit. We speak to entrepreneur Mehis Pärn, and ask him why barely more than a third of Europeans dream of becoming entrepreneurs compared to more than half of Americans or Chinese.

“It is not in our culture,” Mehis tells us. “It has been easy and convenient to be an employee rather to start your own business. I think it has worked well for Europeans so far but it’s going to change.”

Here, children aged five to eighteen get hands-on experience of what it’s like to be an entrepreneur – while having fun. Divided into groups, they simulate running their own companies.

This makes them five times more likely to start a business one day say surveys.

According to Mehis, role-play simulation is the closest way for young people to get practical real life experience of entrepreneurship. “As mindset and values are the foundation, it is important we deal with those in young age so it is easier for them to learn skills and knowledge later on,” he says. “Our role-play games promote creativity, cooperation, independence, taking responsibility and let young people to fail safe and try again. And get the habit of plan things ahead and analyze later. Mostly things that regular lessons at school are lacking.

“Stepping into grown-ups’ shoes for a day gives a young person a totally different perspective and knowledge about how companies and taxation works, how the customer feels, what problems both the employers and employees face. And last but not least – where the money comes from! It is important, because not many schools are teaching that and only few children have the proper role models at home,” he adds.

Teachers are particularly interested in the method. Classes are often tailor-made for teachers, with additional seminars, workshop or follow-up coaching and mentoring included.

Some 2.500 students and teachers have visited the village since it was created a year ago. For the teachers too, it’s a great way to learn while having fun, and then pass on the experience to their pupils. Art and craft teacher at Järva-Jaani Gümnaasium Maris Piiroja wants to take it a step further.

“This training has given me an idea: I want to organise a week-long project dedicated to entrepreneurship in my school. And I will also tell my students to visit the Entreprise Village,” she tells Euronews.

According to Mehis Pärn, today’s economy is chancing the way we work.

“The new economy brings us new business models and more rapid innovations. So freelancing, sharing economy and more careers per life are here to stay. So people and companies need to be prepared that everything is changing all the time.”

The Enterprise Village is running for the European Enterprise Promotion Awards, a competition that has shone the light on hundreds of entrepreneurial projects over the past decade. Winners will be announced at a ceremony in Tallinn on November 23.

Asked what advice he would you give European entrepreneurs inspired by his initiative, Mehis Pärn says: “Be a good Partner for school, because schools already know they have to change the way they teach but they don’t actually know how to do it. As they are very conservative, please be very patient with them.”