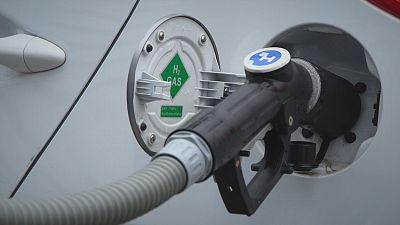 Replacing gasoline and diesel with hydrogen is one of the answers to reducing CO2 emissions. The goal of the EU-backed H2ME Project is to help develop this technology.

Today, there are only a few hundred vehicles that run on hydrogen in Europe. Denmark is leading the way. It is the first country in the world equipped with a nationwide network made up of ten hydrogen fueling stations.

#cleantransport17 –
there are today 77 #fuelcell vehicles in Denmark,
nation-wide network of 10 #hydrogen stations

“Instead of a battery you have what is called a fuel cell, where you have oxygen reacting with hydrogen, creating electricity and water. There is a chemical reaction: the water goes out the tail pipe and that is the only emission,” explains Tejs Laustsen Jensen, CEO of Hydrogen Denmark.

There are a number of advantages in using hydrogen over battery-electric vehicles according to their makers.

“It drives very smoothly, you don’t have any noise from the engine,” says Tejs Laustsen Jensen. “The benefits are that you can keep the pattern you are familiar with, go into a refueling station and fill up your tank in 3 to 5 minutes and then you are on the way again with a range of 400 to 600 kilometres.”

Electric Vehicles Have an Energy Problem. #Hydrogen May Be the Answer https://t.co/HcAPxEoeAV

One of the challenges is to produce “clean” hydrogen from renewable sources. The technology already exists. In the city of Sheffield in northern England, this station is equipped with an electrolizer. The wind turbine provides the energy needed to produce on-site hydrogen using water electrolysis.

“Most of the hydrogen that we have today comes from fossil fuels,” says Ben Madden, project coordinator at H2ME. “But when we think of using hydrogen for mobility and transport we are thinking about green hydrogen production sources. We can directly couple renewables with a single wire to the production source and then to our mobility.”

Research is well underway. The aim is to improve the efficiency of electrolyzers, the devices that separate water into hydrogen and oxygen. The hydrogen can then be purified and stored on site. ITM Power is a company that specialises in the manufacture of integrated hydrogen energy systems, and is developing advanced electrolyzers to produce what it calls “clean” hydrogen.

“We can make the hydrogen when electricity is in surplus, when the cost is lowest and when it’s greenest. And we can make it anywhere. So we can make it on site at the petrol station, or should I rather say, the refueling station. And that enables us to eliminate the need for tanker delivery of fuel,” says Charles Purkess, business development manager at ITM Power.

The challenge is also to bring down the cost. Today, it is much more expensive to buy and run a hydrogen-fueled car than a conventional one.

Will hydrogen cars compete with battery-powered cars? Their makers say there is room for both on the road.

“The mix of the future vehicle will be between battery and hydrogen, and you can already see that there are battery-hydrogen hybrids on the road, etc… I think we will see all three solutions, but we need to compete first and foremost against the fossil technologies,” concludes Tejs Laustsen Jensen.

The ambition being to see hundreds of thousands of hydrogen vehicles on Europe’s roads ten years from now.

Takeaway: Hydrogen, a green fuel for the future