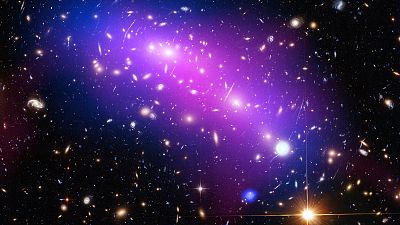 Looking for dark matter is “like looking for a black cat in a dark room”, according to particle physicist Caterina Doglioni. “This cat does not emit or reflect light, so even if you have a torch, you wouldn’t see it,” she confides.

For nearly a century, scientists have counted on the existence of dark matter, a non-luminous material that allows them to justify many of the phenomena in astronomical observations that they observe, but can’t explain.

Many theories and astrophysical calculations need dark matter to be present but scientists have never, ever been able to detect it. Why is this ‘black cat’ so elusive?

Let’s start with the known knowns, and the known unknowns. It’s widely agreed that all the tangible ‘stuff’ you see around you – cats, people, planets, stars, and galaxies – represents about 5 percent of the ‘stuff’ in the universe. A baffling 95 percent is dark, either in the form of dark matter, about 27%, and dark energy, about 68%.

If there is so much dark matter out there, how come it hasn’t been detected yet?

“We have seen evidence for dark matter through many astronomical observations. We think it’s a particle but we have never detected this particle and the reason for this is that we think that dark matter is a substance that does not interact at all with normal matter and, also, does not give light or any other electromagnetic radiation. That makes it extremely difficult to detect it,” he says.

Euclid is a space telescope that is due for launch in 2020 and will observe the movement of galaxies in unprecedented ways in order to track the interaction of dark matter with ordinary matter like stars. So it’s not aiming to directly ‘see’ dark matter, but to do a better job of grasping how it functions. The mission also investigates dark energy and how it plays a role in accelerating the expansion of the Universe.

Meanwhile here on planet Earth, the particle physics community, always up for a challenge, are trying their hardest catch a glimpse of this ‘black cat’ as it scampers across the dark room. Using big particle accelerators, like CERN’s Large Hadron Collider, they generate proton collisions in the hope of detecting a ‘new’ or unknown force, which could be then proven to be dark matter.

They also try to directly spot dark matter if it’s picked up by one of their detectors, kept down low, underground in the LNGS, or up high, attached to the International Space Station. And they also hunt for particles that would be produced when dark matter interacts with itself or with another particle. So far, they’ve found nothing, but they’re convinced they will be able to grab the black cat one of these days.

If they do get a hold it, it still may not be enough. “Each one of these (techniques) by itself is not enough to discover dark matter. You need more than one to really pin down what dark matter is and to confirm a discovery”, explains Doglioni, a member of the ATLAS Collaboration at CERN and Associate Senior Lecturer at Sweden’s Lund University.

Different branches within the scientific community collaborate in order to find what could be considered the Holy Grail in astronomy. However, each specialist takes their own approach.

“There are conferences discussing how to detect dark matter. People are exchanging their experiences through these conferences although the way you detect it, for instance, if you look at particle interactions it’s a different community than people who try to observe dark matter like us astronomers. There is an overlap but there are large communities working independently from each other to detect dark matter,” explains Euclid scientist René Laureijs.

It might be a matter of decades before we get a true glimpse of dark matter. But the cat-hunting scientists are convinced they’ll get their hands on that moggy. “It could be that dark matter is very difficult to find because it’s very rare and that we haven’t found it because there’s not enough data,” says Doglioni.

The answer is to run the LHC for another two decades, and in the meantime prepare plans for newer accelerators. They also put their faith in their equipment: “We’re also counting on technology getting better,” she told Euronews. “In 50 years’ time we’ll have technologies that will allow us to go forward, even though it seems difficult. But I think we’ll get there, yes.”