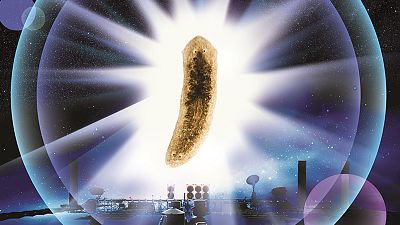 A regenerating worm from Earth has come back from the International Space Station with two heads, a shock finding that may have significant implications for advanced health care for humans.

Scientists from Tufts University in Boston cut in half a group of worms, packed them into a cargo spaceship and sent them off for a five-week stay on the International Space Station. One of the aims was to study how being in space could affect these worms’ well-studied regeneration process. When they came back they found a shocking result: one of the worms had two heads, one at each end of its body.

Professor Michael Levin, Director of the Allen Discovery Center and co-author of the research, told Euronews: “The experience of space travel is kind of complex in that, when you go up to space, you experience zero gravity but you also experience loss of the geomagnetic field, you experience various vibrations during take-off and landing. There are stresses and G-forces for take-off and splash down. So, there were numerous physical perturbations on these worms. At this moment, we don’t which of those is specifically responsible for this outcome. Possibly, all of them”.

The worms in question are called flatworms, or planarians, and are known for their mesmerizing ability to regenerate. Within two weeks, a flatworm which has been cut in half, or even into thirds, can reconstruct the body parts it is missing. Researchers have studied these worms for many years, and no ‘two-headed’ anomaly is known to have ever occurred naturally on Earth. The flatworm is an ideal model to study regenerative processes, and scientists at Tufts sought the opportunity to study these processes up in space.

Professor Levin and his fellow scientists began the preparation to send flatworms to space in late 2014. They began by starting to work out the logistics and designing the packaging that would allow the worms to survive the trip there and back. The worms were then cut into pieces: some of them had their heads chopped off, others lost their tail and a third group had both their heads and tails removed. They were then placed into tubes filled with a mix of half water and air. The worms blasted off to space on 10th January 2015 for their 32-day stay on the International Space Station. During this time, they remained sealed in their packaging and Levin and his colleagues had no idea what was happening to them or even whether they had survived.

The exciting reveal happened on 11th February 2015 when the group of scientists opened the box. They found a number of differences between regular flatworms and the space worms – the space worms had different levels of bacteria in their bodies, and there were different levels of fatty acids and proteins from the worms in the water around them. But the biggest and most visible difference is one of the space worms had two heads, one at each end of its body.
What’s more, the worm with two heads has since reproduced as it normally would by splitting into two. But, what’s unusual about this is that its offspring also re-grew two heads. This means that whatever caused this worm to change has had a long-term impact on its body and nervous system.

A report on planarian regeneration in space was recently published.

Ok, I get it. What does it mean for humans?

Flatworms share many of the same biological processes as human beings, and they bear a large number of stem cells that allow them to produce new tissue. Down here on Earth, we have been studying these flatworms and their regenerative abilities in order to develop new and better therapies for humans.

While research on astronauts show the negative effects of space travel on humans, Professor Levin believes this research shows a possible big upside too:
“It may turn out that some aspect of the experience of space travel makes it easier for stem cells to do things that they normally wouldn’t do back here on Earth. This may also apply for other cell types or even collections of cells and tissues that make group decisions on regeneration and cancer suppressions and things like this”.

Studying these worms and pushing this research further may point towards important biological findings and the discovery of new medical therapies and treatments.

What next for the ‘worms in space’ experiment?

Firstly, his team must find a way of cutting up the worms up while in space.

The regenerative process begins the moment the worms have suffered trauma. So, as the first batch of space worms were sliced in two on Earth, part of the process of regrowing their lost half actually began before they were up in orbit. This means Levin and his team have missed out on the impact of the space environment on the early stages of regeneration. For now, they have envisioned two possible solutions: either they create an automated system that would slice up the worms once they’ve reached the ISS, or they ask astronauts themselves to do the job. However, the latter is quite unlikely: “It’s possible but very difficult because there are already huge demands on astronauts’ time,” says Levin.

The second improvement is finding a way of receiving information on the regeneration process of the worms as it’s happening up in space.

While in the last experiment the vials full of worms remained sealed and were only examined once back on Earth, the next flight should allow scientists to evaluate the processes in near real-time. This will help them further understand the mechanisms of what exactly happens when the worms are floating in space, subject to micorgravity and an altered radiation and geomagnetic environment.

Does nature favour heads or tails?

While one of the worms came back with two heads, none came back with two tails. In the lab the scientists know how to alter the electrical signals between the worms’ cells in order to make them grow two heads or two tails, but when left to their own devices “they never make a mistake and make two heads”, explains Levin. And they never make two tails: “Actually, growing two tails is much more difficult in flatworms than growing two heads. There are fewer ways to force worms to grow two tails than there are to make them grow two heads. And even when they do make structures that have no brains and turn on tail-specific genes, their actual shape is often quite head-like”.

So nature favours heads. And for one weird, wonderful and scientifically significant worm, there’s nothing truer than the old saying that ‘two heads are better than one’.