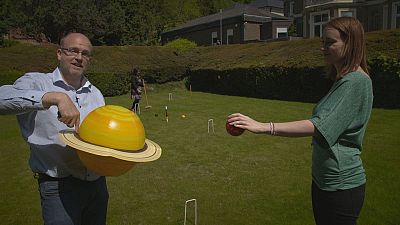 Right now the Cassini spacecraft is flying between the rings of Saturn and the planet itself, a daring trajectory chosen to conclude a unique exploration mission.

To find out what that orbit means, and to look back at some of Cassini-Huygens finest moments, we met up with key members of the science team in the UK for this edition of Space.

It is a sunny day in the Surrey Hills south of London as we head to the Mullard Space Science Laboratory. This is a mansion house transformed into a science centre for University College London researchers, offering a picturesque spot from which to study the solar system’s most picturesque planet.

MSSL’s Head of Planetary Science, Geraint Jones, explained how the Cassini team is swinging the spacecraft into its final orbit to get the closest possible view of Saturn.

“Cassini has been orbiting the planet for many years, and it’s using Titan to change its orbit,” he told Euronews. “And then at the end of April it changed the orbit again, passing close to Titan.

“And now the really exciting bit: we’re passing between the atmosphere and the ring system of Saturn, and doing this 22 times until the end of September when the mission ends.”

Jones added: “By going inside the rings we can measure the distribution of mass inside the planet, and finally figure out how much material is in the ring system orbiting around the planet itself.”

One of the major findings so far is that the two-thousand-kilometre gap between the icy rings and Saturn’s cloud tops is empty of dust.

There is still a huge amount we don’t know about Saturn, however, as Professor Michele Dougherty from Imperial College London told Euronews. She has a magnetometer on Cassini, and underlines some of the key points the team hope to learn with this orbit.

“We don’t understand what it’s interior looks like, we think there’s a solid core, there’s probably a liquid region above that core which is somehow generating the magnetic field,” said Dougherty.

“The other thing is – it’s quite embarrassing to admit this – but we’ve been there for 13 years and we still don’t know how long a day is on Saturn.”

Saturn is what is known as a gas giant, a planet made up of 75 per cent hydrogen, and it is thought a day is around 10 and a half hours long. But nobody is exactly sure because of the difficulty in measuring its rotation.

The Cassini spacecraft’s orbit sees it flying not only between the rings of Saturn, but also over its poles, giving an even better view of the strange hexagonal feature at the top of the globe.

“One of the coolest images of Saturn is the view of the north pole where you see that hexagonal structure rotating in the atmosphere,” said Dougherty.

“By being able to remotely view the atmosphere and see how the structure changes over time it allows you to understand the dynamics of the atmosphere, if material is coming up from below.

“Some of the instruments are able to tell you what kinds of molecules and material are in the atmosphere, and so it’s almost like tasting the atmosphere without having to get into it.”

The Cassini-Huygens mission is a joint effort between NASA, ESA and the Italian Space Agency ASI.

Since arrival in the Saturn system in 2004 the mission has allowed a rich range of discoveries to be made, in particular of Saturn’s dozens of moons.

Back in January 2005 Cassini dropped off ESA’s Huygens probe onto Saturn’s moon Titan, the most distant landing ever accomplished by a spacecraft, and one which revealed a dingy world where petrol-like rain falls from the sky.

ESA Huygens Mission Scientist Jean-Pierre Lebreton told Euronews that Titan has some similarities to our own planet, but in other ways it is very different.

“The temperature at the surface of Titan is around minus 180 degrees, so it’s very cold,” he said.

“The landscapes of Titan look a lot like what we have on Earth – we have rivers, we have lakes, we have seas, almost oceans of methane.

Lebreton added: “It rains, it rains methane, or a mix of ethane and methane, so there are lots of meteorological phenomena or geophysical phenomena on Titan that make you think of what happens on Earth, but the ingredients are quite different.”

The other moon of Saturn to fascinate scientists is Enceladus.

Far smaller than Titan at just 500 kilometres across, it is active and dynamic, as Saturn specialist Sheila Kanani explained.

“We realised with the Cassini mission that Enceladus is covered in ice, and at the south pole there are cracks in the ice,” she said.

“From those cracks there are jets of material coming out. And Cassini flew through the jets in 2008 and measured salty water, ammonia, silicates and hydrocarbons, all kinds of interesting possible markers for life.”

Enceladus is extremely active, with the jets shooting out hundreds of kilometres from the surface.

“As the plume jets out it covers Enceladus in fresh material, making it the brightest object in the solar system,” said Kanani.

“It also replenishes the E-Ring, which is one of the wider rings of Saturn. Which shows why Enceladus is so important for Saturn.”

The Cassini spacecraft’s 13-year odyssey around the Saturn system comes to an end on the 15th of September this year.

To avoid the spacecraft crashing into Titan or Enceladus – two pristine moons that just could be home to life – Cassini is being deliberately destroyed in the clouds of Saturn.

“Well the end of the mission – it’ll be very sad, but we’re going out taking science data all the way down,” said MSSL’s Geraint Jones.

“The orbit will get lower and lower, and we’ll start skimming the top of the atmosphere, and there are few instruments on Cassini that can sample the atmosphere directly, so we can measure instantly what the atmosphere is made of.

“In the very last pass through the atmosphere it’ll get so deep that the spacecraft will start tumbling, and will burn up, and eventually will become part of Saturn itself, and that sadly will be the end of the very successful Cassini mission.”

Cassini will keep an antenna pointed at Earth throughout its final dive, sending back data right up until the moment it breaks up, never to be heard from again.

Five reasons why Hubble is a Legend of Space