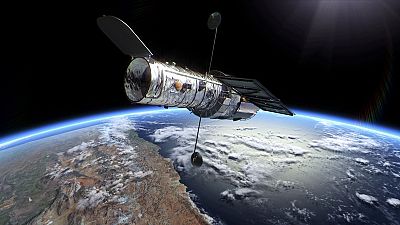 The Hubble Space Telescope has revolutionised cosmology and astrophysics, and offered the general public an awesome array of stunning images of distant galaxies, black holes and stars.

Launched in 1990, the joint project between ESA and NASA initially had problems seeing clearly, as it had a problem with a mirror. But that was soon repaired by Shuttle astronauts and began to deliver on its promise of an unfettered view deep into the cosmos.

Former ESA director of science Roger-Maurice Bonnet recalls how it changed astronomers’ lives: “We had this possibility to look at the stars, the universe, in a very precise way, really sharp images, and we were also able to look at wavelengths of light that are absorbed by the atmosphere of Earth, like ultraviolet and infrared.”

“Everyone was very excited with this idea that we were going to discover things that had never been seen before, and that’s exactly what happened,” he told Euronews.

Giovanna Tinetti, Professor of Astrophysics at University College London, used Hubble to make the first detection of water in the atmosphere of an exoplanet. He recalls how Hubble changed the course of her career away from theory.

“When the first observations became available, then it really changed everything. And I myself moved to observations because I thought it was even more exciting to see what is really happening, rather than to speculate what might be happening.”

Hubble has been updated and refined in orbit by a series of five servicing missions in which parts were replaced and improved, allowing its hardware to keep pace with scientific and technological developments on Earth.

The observations it has made have changed everything. In “understanding cosmology, understanding the nature of very far away galaxies, really Hubble was the first instrument able to deliver observations that were ground-breaking,” said Tinetti.

Hubble has allowed us to better measure the age of the universe, spot black holes and stars in formation, and with its Ultra Deep Field views it has shaken up theories for how galaxies formed in the early universe.

With such an incredible list of achievements, the telescope has a special place in the hearts of scientists.

“The fact that Hubble is always there, through the careers, at this point, of a number of generations of astrophysicists is really remarkable. Astrophysicists are getting old, but it looks like Hubble is still there,” laughed Tinetti.

'Beam me up to Bay 9': Astronaut recalls mission as Hubble turns 30

Five reasons why Hubble is a Legend of Space