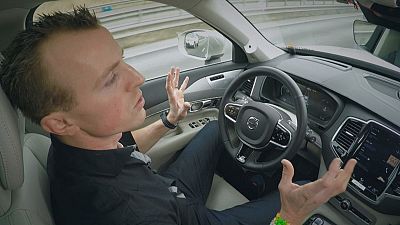 Imagine driving 70 km/h along a busy motorway, but nobody has hold of the steering wheel.

Just how safe are you in a driverless car? And will we really be using them in ten years time?

Why would we need self-driving cars? I asked Aria Etemad, vwgroup_en</a> researcher in automated driving. Story coming up in <a href="https://twitter.com/euronews">euronews#Futurispic.twitter.com/pz8yMRr2ka

The cars automatically assess the situation on the road and if appropriate invite the driver to switch to autopilot.

Birthe Finkendey, Mechanical engineer, Volkswagen Group Research said: “When certain conditions are met, such as I’m not driving faster than 130 km/h, the road has lane markings, and I am not performing any risky moves, – then I get an automatic prompt to switch to autopilot.

“A message tells me that the autopilot is ready, and I can activate it by pressing these two buttons.”

Daniel Tidholm, a research engineer at Volvo Car Group, said: “The car has very good knowledge of the surrounding vehicles.

“It’s always having a safe distance with the car ahead, it’s always monitoring the traffic.

“So in many ways I feel safer, actually, than if I would drive myself.”

These demo cars automatically stay within the road markings and match their speed to the traffic around them.

They can also assist the driver with manoeuvres such as changing lanes or over-taking.

#VWGroup: Individual mobility redefined – autonomous driving at the touch of a button #Sedricpic.twitter.com/32zvX7aV5U

Mr Tidholm added: “I want to change the right lane, so I double-press on the right paddle.

“The sensors are monitoring that side, finding a good gap.

“And if a good gap is found, the car will switch on the indicator and perform the lane change.”

But these self-driving cars do not stop drivers from needing to watch the road.

In an emergency, the controls can quickly switch back to manual.

The driver has to stay alert.

The manufacturers are working on perfecting the automatic settings before releasing the cars on to the market.

This means improving the awareness of the cars.

Automated cars rely on a number of cameras, radars and other sensors to understand their environment.

Various signals are fused together in the car’s computer brain.

These tell the autopilot what’s happening around the car.

Henrik Lind, technical expert for Volvo Car Group, said: “What we need is a vehicle that is able to understand the complete environment around us.

“We also need to understand the other vehicles around us, and their intentions.

“And not to forget, we’ll also need to have the human-machine interaction well-implemented in the vehicles.”

.VolvoCarGroup</a>&#39;s Henrik Lind told me how self-driving cars will "hook up" to other cars, assembling into fascinating car trains <a href="https://twitter.com/hashtag/Futuris?src=hash">#Futuris</a> <a href="https://t.co/br0sApqDsg">pic.twitter.com/br0sApqDsg</a></p>&mdash; Denis Loctier (loctier) March 28, 2017

Individual cars will need to communicate not just with each other but with road infrastructure such as traffic lights, to flow through traffic safely and efficiently.

Aria Etemad, researcher in automated driving for Volkswagen Group Research, said: “I believe for the urban scenario you cannot rely on the vehicle and the vehicle sensors only.

“You have to be connected to your environment.

“That means in the future we may have many sensors at the intersection.

“Maybe laser scanners and so on, that are just understanding what is going on at this intersection, how many people are crossing the intersection and so on, pedestrians, for example.

“And then this information has to be shared with the vehicle, so the vehicle is seeing more than by its own sensors only.”

Left turn in a city is “basically a nightmare for an automated vehicle”, highways much easier — Aria Etemad, vwgroup_en</a> researcher <a href="https://twitter.com/hashtag/Futuris?src=hash">#Futuris</a> <a href="https://t.co/9hJXZ8E6Jr">pic.twitter.com/9hJXZ8E6Jr</a></p>&mdash; Denis Loctier (loctier) March 28, 2017

It will take years of research and development to get self-driving cars working together.

Arnaud de La Fortelle, director of the center for robotics at the university, said: “The problem is that there’s a contradiction between two objectives, the faster I go, the less confident I am.

“If I want to be really confident, I go very slowly, and that’s not efficient.

“So how do we increase both at the same time?

“For that, we need not only a good system of communication, but also good algorithms.”

In this computer simulation, selfdriving cars cross an intersection while wirelessly coordinating with each other.

Zhiyuan Yao, researcher in intelligent transportation at MINES, explained: “The more realistic a simulation is, the more problems there will be.

“But we’re trying to take all these problems into consideration – in this way, we can solve them step by step.”

Are drivers off the hook?

All this means drivers will be left with little to do.

A distracted driver may miss warnings to take back control of the car.

Driverless cars and their impact on traffic and safety https://t.co/ytmmL16uqTpic.twitter.com/uopnzOwG5P

The autopilot system should do its best to either keep driving or stop safely.

Researchers at the German Aerospace Center in Braunschweig are developing a futuristic way of helping drivers of automatic cars stay alert.

They’ve installed LED lights around the inside of the car, which change colour in response to danger.

As driverless technology gets safer and more efficient, researchers hope within 15 years autonomous cars will be increasingly common.