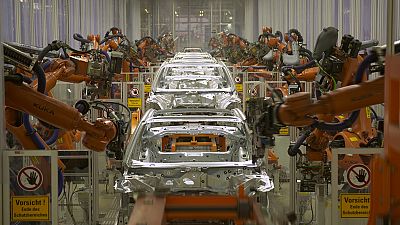 Since the start of the Industrial Revolution in the 18th Century, machines have been taking over from human workers.

They are cheaper to run and produce more, but will robots end up doing all our work in the future, and what will be our role be in society?

The shift to automation brought mass production and a rise in global demand, but also anxiety over job losses – and those fears still exist today.

Experts believe the latest cyber-physical systems and the “Internet of things” demonstrate how we are now in the fourth phase of the Industrial Revolution, and we need to figure out how to progress.

In Germany, the government is looking to the future with a programme called Work 4.0.

The new “social compromise” is aimed at providing more work-life balance for staff and better working conditions, while embracing technology and its advantages.

Euronews journalist Damon Embling visited Audi’s sprawling car factory in Ingolstadt, north of Munich, to see how they are adapting to a rapidly changing world.

Around 600,000 new cars are made at the factory every year, with each one created by 1,000 different robots. But the company says it will not be slashing its 44,000 on-site staff.

Dr Jochen Haberland, Audi’s Vice President of Human Resources, said: “There will be big changes in the nature of work, but in the end we will need all of our employees like we do today.”

He added: “Jobs are already digitized in particular in the offices. We also implemented mobile working. Now we’re introducing flexible working hours in shifts which is part of a pilot project.”

Business experts believe the social change will be revolutionary, as we juggle increasingly hectic lives.
Patrick Heitmeyer, an independent business consultant, told Euronews: “I don’t think everyone is ready yet, it is a slow transition. But as the technology moves forward, and the awareness comes, I think it will be a quick transition. I think this is going to be a game-changer.”

“The jobs of the future, let me say the jobs of today and tomorrow, 90% of those jobs will require a certain level of digital skills while we see that more than 40% of the European labour force don’t have enough digital skills – so we have a lot to do there,” Mrs Thyssen said.

“We ask people to stay longer in the labour market so we must make it possible that they stay.

“First you have to assess what skills people have. Secondly what is an adequate pathway for them individually, to make progress and then of course to make it possible that they document their new attainments, but this is also possible for people that are – let me say – my age.”

She added: “We must also ensure that everybody is in a social security system so they have a scheme where they contribute to a system, where they are entitled to certain benefits where conditions are fulfilled

“We are preparing now the final launch of, let me say, this pillar of social rights – with some principles and values that can serve as as reference framework.

“We have responsibility at all sides. We have to adapt and we also have to take our own responsibility but it is up to the politicians, to those who have political responsibility to create an environment to make that possible.”

Changing the way we think about work

"Jobs are already digitalized in particular in the offices"