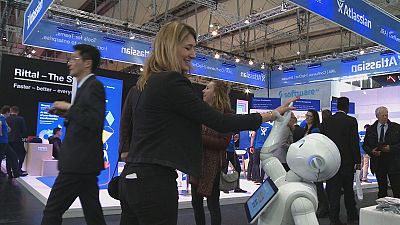 There is something in the air at the world’s biggest computer fair in the German city of Hanover CeBIT.

Drones are among the trending topics at the fair, as they are no longer just more about capturing images.

At CeBIT’s drone park we can see the future of drones is not about speed but rather about functionality and efficiency.

“A growing market segment is industry and inspection flights,” Intel’s Matthias Beldzik told Euronews. “What you see here behind us are models of industry facilities such as offshore facilities where it is not easy to fly to. So we need a strong and reliable system in the air.”

Intel says that drones reduce an inspection from more than seven hundred days to just 14.

“Cameras and sensors get better and they become lighter,” Beldzik explained. “So flight times get longer, and the data about the facilities inspected get more and more reliable.”

Yet it’s not just about drones at CeBIT, it’s about literally anything connected to the internet.

Another topic in focus at CeBIT was human-robot collaboration as seen in a research project by the German Research Center For Artificial Intelligence.

This mixed reality system makes it possible to manipulate robots in real time, and remotely.

A robot in the Research Center’s Lab is operated from 500 km away.

“You can try it out,” invited Mohamed Mehdi Moniri from the German Research Centre for Artificial Intelligence. “Put those glasses and you will be able to handle robots that are not even here. They are 1,000 kilometers away.”

Using mixed reality and virtual reality systems, workers at one location together with colleagues and robots at a second location can, for example, handle toxic materials.

The user interacts with the robots to trigger the required action.

“If a worker has those glasses, they will find it easier to work,” Mehdi continued. “We have concrete projects with the industry that we have developed around those glasses, which will help to contribute to an ergonomic workplace.”

Swiss Post and its bus service PostAuto have been operating the first driverless city bus in the world, in a pilot project that has been underway since last year in the Swiss city of Sion.

“We have been on the road now for nine months in the centre of Sion with two small buses and we have so far transported 16,000 people,” Jürg Michel, PostAuto Mobilitätslösungen AG told Euronews.

While there were some sensor issues initially, they well enough in clear conditions to help the buses navigate smoothly through open traffic.

“We do have three LiDAR sensors here, here, and up there. They are like the eyes of the vehicle,” said Michel. “The bus recognises obstacles through these sensors and knows that it has to stop.”

Who ya gonna call? Hack busters!

And finally, IT security specialist Sophos is looking at possible downsides.

The company runs a so-called haunted house, which shows how easy it is to hack into some smart homes around Germany and throughout the world.

“What we want to show is that there are many configuration errors,” said Marco di Filippo, Security Expert, Project Haunted Hous. “Many people put their smart homes, their own personal Internet of Things, online. At least it should be properly protected.”

Systems linked to smart homes can potentially be attacked if not properly secured.

CeBIT first started 30 years ago. At this year’s event thousands of exhibitors from around the world attracted hundreds of thousands of visitors.