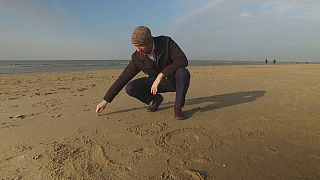 Pluto turns out to be far more weird than anyone ever expected, with all kinds of unexplained phenomena on the surface.

We sought out some of Europe’s finest ice planet experts to find out more:

Pluto has been a mystery since it was discovered in 1930.

First called a planet, then re-classified as a dwarf planet in 2006, the more we learn, the more it captures the imagination of scientists like ESA’s Elliot Sefton-Nash.

Elliot on the beach

“One of the important things you should understand about Pluto is the real scale of it compared to the rest of the solar system,” ESA Planetary Scientist Elliot Sefton-Nash told Euronews. “So we’ve come to the beach in order to convey that scale and distance. So if I draw the Sun as a 30 cm circle, then we have to walk about 35 steps this way in order to draw the Earth in the same type of scale.”

“So the Sun is over there, at 30 centimeters, which means that the Earth should be about here, about 3 millimeters. Something like this. If we were to draw Pluto in the same scale, it should be 0.3 millimeters, and it should be 1 km down the beach.”

“Now obviously I can’t draw something that’s 0.3 millimeters, so I have to draw Pluto a bit bigger. If this is Pluto, then its largest moon is Charon, which is about half its size. But Pluto has four other moons, Styx, Nix, Kerberos, and Hydra. So there’s a lot going on around the Pluto system, it’s not just a cold, dead icy rock.”

Humanity had its first close up view of Pluto in 2015, when NASA’s New Horizon’s probe flew past the dwarf planet and its moons.

What it witnessed was unlike anything we’d ever seen before.

Scientists working on New Horizons, like Bernard Schmitt and Tanguy Bertrand, were spellbound.

They were seeing a distant world that didn’t resemble the rocky planets Earth or Mars, nor the gas giants Jupiter and Saturn.

“When New Horizons arrived at Pluto, we were struck by the topography. Why? Because you have mountains that reach up to four kilometres high, and you have this huge basin which is three kilometres below the average surface height. Those are enormous topographical differences for a small body like Pluto.”

The 6 gigabytes of images and scientific measurements slowly sent back by New Horizons are now filling in the gaps in our knowledge of Pluto.

What the team is finding as they dig into that data is a world dominated by ice.

Bernard and Tanguy took us to a frozen lake near Grenoble and cleared the snow to allow us to compare what we see here on Earth, with what has been discovered on Pluto.

“The water ice here is close to zero degrees, like in all the glaciers here in the Alps,” Bernard Schmitt, CRNS Research Director told Euronews. “So it’s relatively soft, it flows, and forms glaciers. But on Pluto this water ice is at minus 230 degrees Celsius, and it’s as hard as rock. So on Pluto it’s water that forms the mountain ranges.”

So the mountains on Pluto are water ice, occasionally dappled with patches of methane frost, while the huge heart-shaped glacier on its surface is made from nitrogen.

Scientists think Pluto has strong seasonal cycles too, which could explain some of the unusual features on its surface.

“The equator is an enigma,” said Bertrand. “There are no volatile ices, it’s just the base of water ice covered in a kind of soot, this black material that’s produced by the photolysis of the ice by UV rays. So there’s a huge contrast between the dark zones of the equators and the brighter areas in the north, and this gigantic glacier of nitrogen ice that’s the size of France.”

That glacier, known as Sputnik Planitia, is thought to be under a million years old, a remarkably young age by planetary standards.

Nobody has agreed on an explanation for how it was formed and how it’s renewed.

Understanding Pluto can really help us understand the solar system as a whole, so scientists think there’s a strong case to go there again.

“I think it would be fantastic to send a lander, to really understand first of all the structures and the mineralogy up close, but also to see it over a longer time period,” explained Sefton-Nash. “Because we’ve only seen Pluto in an instant of its orbit, but the seasonal changes might be very dynamic if we could watch it for a whole year.”

“It’s a strange place, and so you really want to simulate this world, do experiments, try to understand how it works. Because there’s a kind of climate, there’s an atmosphere on Pluto, there are ices, but it’s not at all like Earth.”

“Nobody imagined we’d find such a dynamic planet so far from the Sun. We’re left with a lot more questions. But a space mission that poses more questions than it answers is a successful mission.”

Just a few years ago Pluto and its moons were nothing but a few pixels in our telescopes, mysterious dots in the asteroid belt beyond Neptune.

Now, we know it better, and we’re curious to know more.

Is Pluto a giant comet? And does it really have dunes on its surface?

Five reasons why Yuri Gagarin is a legend of space