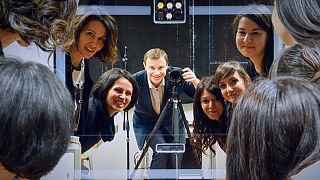 When you look into a Wize Mirror, it looks back at you. It is a prototype of a smart mirror that detects disease symptoms.

The mirror’s reflective surface has a touch interface which allows the user to interact with a computer system fitted with multispectral cameras, 3D scanner and a breath analyser. A face recognition system automatically identifies the user.

The Wize Mirror is being developed by researchers at the European research project SEMEOTICONS, coordinated by Italy’s National Research Council (CNR) in Pisa.

“What you see is a “Wize Mirror” — a “magic”, or rather an intelligent mirror that features sensors and interactivity,” said Sara Colantonio, an artificial intelligence (AI) researcher at ISTI; and the SEMEOTICONS project coordinator. “It analyses facial signs to measure the health level of the person in front of it.”

This mirror has sensors that go beyond skin deep to find out how healthy you really are http://t.co/JeepGGZbuQpic.twitter.com/8uLGulw9V0

“Now, an ultraviolet flash will identify substances in the skin that are associated with the risk of diabetes,” explained Veronica Chiara Zuccalà, researcher in biomedical engineering, IFC-CNR. “Now it takes images for 20 seconds to study facial micro-movements that indicate the person’s stress level. And this new spot of light allows the system to study other skin indicators related to cholesterol.”

“At the end of the data acquisition, the system integrates all facial parameters into an ‘index of wellness’ which shows Chiara’s risk of cardio-metabolic diseases,” Colantonio Euronews.

Scientists at this European research project used volunteers and medical diagnostic equipment to fine-tune the algorithms that spot telltale markers of various diseases.

Three fully functional prototypes have been successfully designed, but before the Wize Mirror can hit the market, its developers want to make it less fragile and more affordable.

“This device is technically very complex, with a lot of cameras — six at the top, two more at the bottom, so the cost is high. We’re thinking about designing new sub-products with fewer functions, but which still provide relevant data to the user — they will be smaller and will cost less,” Meritxell Gimeno Garcia, CEO, DRACO Systems, told Euronews.

Clinical trials in France and Italy showed a good correlation between the mirror’s readings and results from conventional diagnostic methods.

“An advantage of this instrument is that it doesn’t only provide information on possible presence of cardio-metabolic risk factors, but also suggests a better lifestyle — a better diet, physical activity, and avoiding bad habits such as smoking,” said Maria Aurora Morales, Cardiologist, IFC-CNR; SEMEOTICONS clinical coordinator.