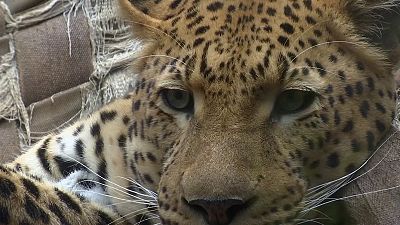 Dressed in ceremonial attire with a difference at least 1,200 men dance at a mainly Zulu gathering in Ebuhleni, South Africa.

They are members of the Shembe church, which has a membership of more than a million, it is a blend of Old Testament-based Christianity and African Zulu beliefs.

They are wearing a mix
of illegally hunted leopard pelts and Chinese-made fake spotted furs.

The conservation group Panthera launched the plan to conserve the leopard.

The elders took some convincing Madoda Zungu is a Shembe church member:“A leopard is one of the animals that actually has got power. In terms of the strength, in terms of thinking, in terms of doing and being a leader in animals.”

Thanks AP</a> for featuring our Furs for Life Leopard Project! Local communities are ESSENTIAL to <a href="https://twitter.com/hashtag/conservation?src=hash">#conservation</a>. More https://t.co/9DtVjzbHyO

Leopards are vulnerable on a continent with a rapidly growing human population. Their numbers are diminished by habitat loss, illegal hunting for their skins and other factors.

An estimated 1,500 and 2,500 leopards are killed annually in the region to meet Shembe demand for skins, and some 15,000 real pelts are currently circulating in the religious community, according to Panthera.

Conservationists hope to expand their fake fur campaign to other ethnic groups and African countries where leopard pelts are incorporated into ceremonial attire.

Fred Berrange is the founder of the Leopard Conservation in Johannesburg: “There’s a lot of leopards that die and unfortunately the leopard doesn’t reproduce like other animals do, it’s a slow reproductive process. And that’s where we have a major problem. A leopard in good times will produce three cubs, out of those three cubs, maybe one will survive and become adult, but only as a 50 percent chance of reaching its first birthday.”

The Panthera conservation group says it has donated over 14,000 fake leopard skins to Shembe followers and demand for real leopard pelts has dropped by 50 percent because of the campaign.