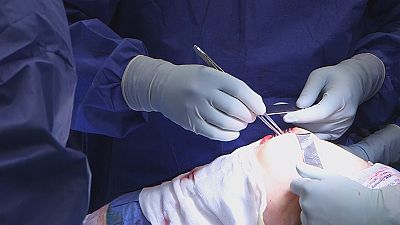 Swiss doctors have reported that cartilage cells harvested from patients’ own noses have been used to successfully produce cartilage transplants for the treatment of the knees of 10 adults with damaged cartilages.

Two years after reconstruction, most recipients reported improvements in pain, knee function, and quality of life, researchers wrote in an article recently published at The Lancet.

Recent news in the Lancet, reviews nose cartilage being used to replace damaged knee cartilage – now that's not to be sniffed at!

These results are the first conclusion of an ongoing large scale trial to discover if knee injuries can be repaired with stem cells taken from the patient’s nose.

Professor Ivan Martin, a specialist in tissue engineering, explained the first steps in the procedure.

“The process consists of the harvest of a small biopsy, it’s a six millimetre punch biopsy from the nasal septum of the patient. This biopsy is chopped into small pieces. The cells are isolated from the small pieces and expanded in number over a culture time of about two weeks.”

Once the tibia is held at the correct angle, the damaged cartilage is cut out and the new one is prepared.

Surgeons place the new cartilage next to the section of old cartilage.

The replacement cartilage is marked out and trimmed, before it’s inserted into the joint.

The aim is to create tissue that is as good as the original, researchers say.

“We think with our therapy in the future we can improve patient function. I also think for the patient it feels right to have a biological repair of his joint and not to have something artificial in his joint,” explained Marcus Mumme, lead researcher, University Hospital Basel

What the team at Basel doesn’t have is a long term assessment of the patient’s grafts to prove the success of the procedure.

“We do not have evidence about the long term durability of our grafts. So in our indications for treatment we exclude patients with degenerative diseases,” added Professor Martin.

Phase two of the trial has now begun, following the success of the earlier study.

Ivan Martin, professor of tissue engineering, and his colleagues from University Hospital Basel, in Switzerland,… http://t.co/qjP24AO8P5