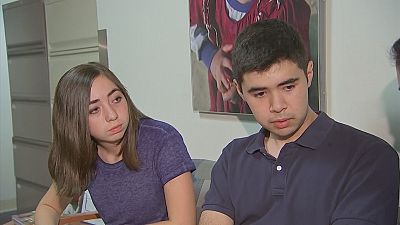 Scientists in the US are seeking to enroll hundreds of families with autistic sons but unaffected daughters in a study looking for genetic clues and protective factors.

Autism is at least four times more common in boys than it is in girls.

Funded by the Autism Science Foundation, a non-profit education and research group, the Autism Sisters Project began last year and is currently speeding up its research efforts, expanding its DNA collection. The goal is to build a big database that other scientists also can use, to help expand the research in a multidisciplinary way.

Scientists say they are finding some “gender-based surprises” that could lead to new ways of diagnosing, treating and perhaps preventing the condition.

She says she hopes this research will eventually benefit her older brother Tommy, who was diagnosed with autism when he was 3 years old.

“I hope that the outcome could be something that could eventually help my brother like a therapy or something just so that it could make his life easier or make him be able to be successful in his life,” said Bak.

Many girls with autism have social skills that can mask the condition, researchers say. And some girls are born without autism despite the same genetic mutations seen in boys with the condition.

Joseph Buxbaum is director of the Seaver Autism Center at Mount Sinai hospital: “Girls actually can have the same mutation as a boy and not have autism, and even need to have twice as many mutations on average to actually manifest with autism.”

Recent studies on autism-linked genes have indeed challenged conventional thinking about the condition
Researchers are trying to identify a “protective factor” that may explain how some girls at genetic risk remain unaffected – perhaps a protein or other biological marker that could be turned into a drug or other therapy to treat or even prevent autism.

The causes of autism aren’t known, but genes and outside factors including older-aged parents and pre-term birth have been implicated.