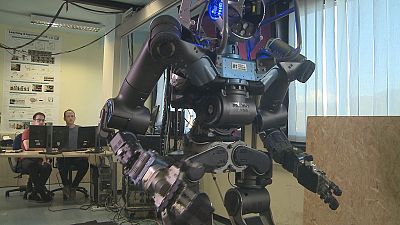 Every joint of the robot...are similar to the power of a 50 cc scooter engine.

Walk-Man is being taught to move and walk at the Italian Institute of Technology (IIT) in Genoa, and could one day save your life.

The robot still needs instructions from humans, but in the near future it should be able to assess dangers and environmental conditions before taking action to get the job done.

The Walk-Man team is currently working on the robot’s software to improve its ability to support itself while walking over rough surfaces.

IIT senior researcher Nikolaos Tsagarakis explained to euronews that the robot is kind of anthropomorphic: it has joints and motions similar to a human body.

“You can see the hand, with five fingers, there is a thumb,” said Tsagarakis. “And it was designed for the purpose to perform very powerful manipulations.”

Walk-Man is being developed within a European Union research project and is fitted with a stereo vision system and a rotating 3D laser scanner.

The robot has already driven a car and can make many human-like movements.

The researchers’ big technical challenge has been how to control locomotion, balance and manipulation of this 1.80 metre tall robot.

“Every joint of the robot, let’s say the knee joint or the hip joint, which needs to provide a lot of effort, are similar to the power of a 50 cc scooter engine,” said Sakoglou.

In places that are safe for humans, robots that look and behave like humans could have advantages over robots on wheels.

Inspired by nature
Researchers from ITT get most of their inspiration directly from nature, as Sarakoglou explained:

“Many principles that exist in biology have given us inspiration on how could be designed a robot. One thing is energy saving, especially through devising mechanisms that are back drivable to make use of swing phases in our natural motion.”

Many of the robot’s actions use gravity rather than energy to move.

“We try to integrate this inspiration in our designs,” explained Sarakoglou, “to make robots that are energy efficient and can operate well longer than the robot can do at the moment.”

The next step for Walk-Man will be a major test it is expected to pass under the eyes of the Italian Civil Protection authority.

During the test, the robot will be sent into a building on fire. Its mission: to search and rescue a human being.