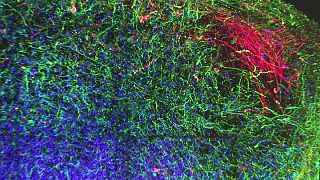 Scientists at the University of Luxembourg have engineered human brain tissue, created from stem cells. They think that this bioengineering can push the limits of their knowledge in biomedicine without having to use animals in lab testing. This edition of “Futuris” meets scientists around Europe who are not short of ideas about how to reach this goal.

I genuinely believe it is not a question of "if", but "when".

The Luxembourg team has a mission. Their bio-artificial mini-brains
are studying new approaches to eventually develop new therapies against Parkinson’s disease. And not only that.

“These approaches are based on human stem cells. Most of these stem cells come from patients, so they are in some way specific to the disease itself. We hope that these approaches will help us replace animal testing in Parkinson’s research. We have some evidence that these systems represent the pathological process in a more realistic way than animal models do. So we think that we can indeed replace animal experiments with our approach. Not only replace them, but also to move the knowledge boundaries forward, and to obtain more meaningful results,” says Stem Cell Biologist Jens Schwamborn.

Many European research institutions are actively studying alternative methods to reduce or ideally replace animal experiments in the labs.

These alternative methods are typically based on either in-vitro systems or computer-based models.

Ispra, in Italy, is where these budding alternative methods are validated, with an eye on human safety. Scientists here for instance, have confirmed that in-vitro brain cells are indeed sensitive to toxic substances.

“These experiments allow us to understand how these brain cells work, and how neurons express their electric activity. It is also possible to measure the effect that toxic substances like pesticides, environmental polluting substances and herbicides have on neurons’ electrical activity. These systems, based on human cells, allow us to understand, in vitro, how all these mechanisms work, providing an alternative model to animal testing in the neuro-toxicology field,” says JRC Biologist Francesca Pistollato.

Beside validation studies, scientists at the EU’s Joint Research Centre promote and guide the development of new animal-free tests, facilitate their uptake and provide databases on these alternative approaches.

“What is very important is of course the dialogue between the different parties. That there is a good discussion together about how we can ensure the quality, how we can ensure the reliability and robustness of these alternative methods without blocking innovation,” says JRC Bioengineer Maurice Whelan.

Back in Luxembourg, scientists at another lab are using bio-artificial human skin to study the eventual irritation effects of new cosmetic creams. Some of these experiments used to be done on rabbits.

“The skin of a rabbit is very different to human skin. And since we know we are capable of mimicking human skin by reproducing it in a laboratory, this is much, much more relevant. It is really human skin. Having done validation studies, comparing data from the animal with this model it makes total sense. It is much more reliable, much more reproducible and probably less expensive,” says the CEO of Atera Bart De Wever.

A combination of stricter legislation and changing social attitudes towards the use of animals in labs is creating a clear demand for faster, safer, reliable and affordable alternative methods.

Will these new methods ever completely replace animal tests?

“I genuinely believe it is not a question of “if”, but “when”. I think that we are making extremely good progress on a number of fronts. But there is still a lot to be done. These new technologies are not simply a replacement of an animal test. They are a new toolbox for being able to tackle research questions in a new way,” says Maurice Whelan.

New toolboxes in the medical field, researchers conclude, that need to be properly validated to further guarantee human safety.