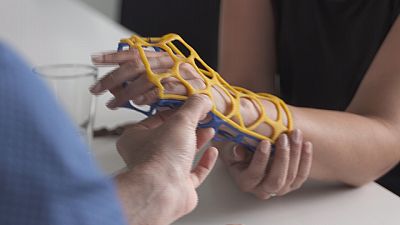 If you’ve ever had to wear a cast, you will be familiar with the discomfort of not being able to scratch that itch on your leg or arm.

Miklós Molnár’s new 3D printed cast might be the answer. Made entirely of biodegradable plastic, it has several advantages according to its inventor: you can shower with it on, it allows your skin to breathe, and, last but not least, it weighs far less than a traditional plaster cast.

Molnár, a Hungarian IT expert, explains where he got the idea from: “There was a similar lattice structure that won a design award, but until now, nobody had found a way of improving it, so this is how my idea is different. I don’t call it an invention, I call it a model around which I have developed a new process.”

He has found support for his concept at Budapest’s Péterfy Sándor hospital. Its chief medical officer believes it will be much more comfortable for patients and would only take around an hour to print at a cost of 50 to 100 euros. The hospital plans to go ahead and test it.

“We could use it when we need to immobilise a limb for an extented period of time, in the event of an accident or disease, it would be a comfortable medical aid that allows the air in, once the swelling caused by the accident has gone down and there is no fear that the bones might move out of place. In all of these cases, it could be useful,” says Ferenc Tóth.

The team is looking for an investor to equip the hospital with the machines needed to create the plastic casts, from scanner to printer. Molnár hopes tests can start by the end of the year with the aim of making the 3D printed casts accessible to patients within two years.