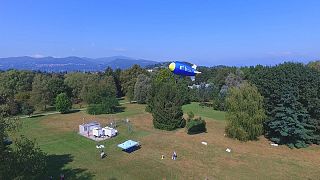 In this edition of Futuris we take a look at the prototype of a small experimental sort of zeppelin. It has been equipped with sophisticated radars and sensors with one goal in mind; to become a new and efficient tool for maritime surveillance.

Radar & sensor specialists and experts in aerostatic balloons are teaming up to try a research tool newly developed for the first time in Italy.

“This prototype is a zeppelin. It is based on the principle of hydrostatic push; based on the different densities of different gases. It uses helium, which is lighter than air, to generate propulsion up. In case of any problem, such as a puncture or tear or any other issue during flight management, it does not fall, it instead glides smoothly without causing any harm,” says the boss of Silvertech.Air, Gregorio Silvestro.

The experimental zeppelin is nine meters long. It can lift up to 15 kilos of equipment, and it is no ordinary equipment.

“It uses a patch antenna with a very narrow-angled beam. The radar is incorporated inside, with an acquisition device, a signal generator and other devices, like motion sensors, GPS, a magnetometer and so on,” says Sensor Scientist at the EU’s Joint Research Centre Vladimir Kyovtorov.

The prototype has been developed at the MELISSA laboratory in the Joint Research Centre with a very precise mission in mind.

“We are experimenting with this alliance between platforms and sensors to help our capacity to spot and rescue the small boats with immigrants that cross the Mediterranean Sea,” says JRC Radar scientist Dario Tarchi. “It is basically an attempt to combine a relatively new platform with old technologies to obtain something efficient, reliable, low-cost and easily-managed for maritime surveillance”.

The sensors and antenna were assembled in laboratory conditions. The technical challenges were huge, specialists say.

“My colleagues gave me the electronic circuits and I had to find a way to insert those circuits mechanically into a small box. Before coming to the final product, you must find good ways to combine both electronic and mechanical parts in a balanced way. The final product has to be compact, well-balanced and it must work well,” says JRC Scientific Technical officer Jorge Manuel Figueiredo Morgado.

Now researchers are looking ahead for ways to improve the efficiency of the current system even further.

“In the future we could use smaller aerostatic balloons to see if we could increase our efficiency, eventually using less powerful sensors but in a much greater quantity,” says Dario Tarchi.

Researchers say they aim at providing European countries with accurate scientific evidence to support their immigration policies with the final goal of saving further lives.

Takeaway: Up in the air