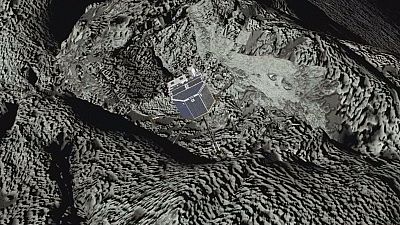 Lost and found. After nearly two years missing in action, the small lander Philae has finally been located in a shadowed spot on the comet 67-P, also known as Churyumov Gerasimenko, just three weeks before the end of the mission.

Philae was last seen in November 2014, after being released by Rosetta. It bounced several times after its initial touchdown, then disappeared from radar. So where’s it been all this time?

“There was a big ridge line on the head of the duck and the lander just kind of found itself in a pocket on the other side of this ridge in a very dark hole so that’s where we found it,” explains Rosetta project scientist Matt Taylor. If we look at the Philae images, the feet kind of sticking up, one in the air, one to one side, resting on a piece of rock, seeing the overhanging cliff and other local terrain, it’s where we thought it was but it’s always nice to get that image to say yes, here I am, and it’s very clear.”

After separating from Rosetta, Philae sent data for three days before its battery ran out.

Locating the lander is essential to put its scientific data into context. But time is running out: on September 30, Rosetta will be sent on a final one-way mission to investigate the comet close up.

“Now the trajectory is such that actually we won’t overfly Philae’s location, so we won’t have a chance, in fact, I think we only have one or two more chances of imaging that location anyway in the current time and it really is one I think, or two, and that’s it,” says Matt Taylor.

Fully analyzing the data from Rosetta and Philae is expected to keep researchers busy for years.

“The future legacy of the Rosetta data is what we take care of, ensuring that when the mission ends this data will be available for future scientists in the world who want to see what Rosetta did,” says Laurence O’Rourke, Rosetta Mission Science Operations coordinator.

While Philae did not have as much time as was hoped for experiments, information it has collected has already helped reshape scientists’ understanding of comets and their role in the early universe. The project is also crucial to designing future missions.