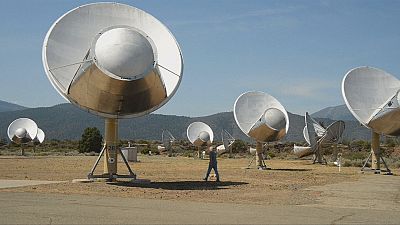 Is there anybody out there?

The fundamental question is rebounding once again after a mysterious radio signal was picked up by a Russian telescope.

The radio waves come from a star system 94 light-years away from Earth.
Astronomers at Allen Telescope Array in California are taking a second look.

This kind of signal might be generated by an alien civilization or resulted from some sort of terrestrial interference. So far, this one is the most likely scenario, even if other options are still considered.

Seth Shostak is director of the Seti Institute suspect that this is just terrestrial interference – explains the director of Seti Institute, an organisation studying the origin of life in the universe.
Mind you, there is a small caveat there, because, indeed, maybe they just ping us intermittently, you know, every two months or every two years or every two weeks. And so if you just make a random observation, it’s very unlikely you’ll find the signal again. So it may be worth coming back to the star system and looking again in the future. But at the moment, it doesn’t seem like this was ET trying to phone us.”

The announcement comes a few days after the discovery of the closest Earth-like planet orbiting the star Proxima Centauri, 4.2 light-years away.

The relative proximity of the planet, known as Proxima b, gives scientists a better chance to eventually capture an image of it in order to understand if it has the basic conditions for life.

Claudio Melo is the director of the European Southern Observatory:
“In addition to being a planet that has the same mass as Earth, it’s the distance – from the star – that makes you to think there is a possibility of there being water in a liquid state on the planet.
There is hope that this type of planet is, as it is said, located in the habitable zone of the star, where life could have developed.”

Further studies may reveal if the atmosphere contains the chemical signature of biological life, such as methane.

The discovery is expected to boost a $100 million project backed by Russian billionaire Yuri Milner to develop a laser-powered spacecraft able to reach the Alpha Centauri system in about 20 years.